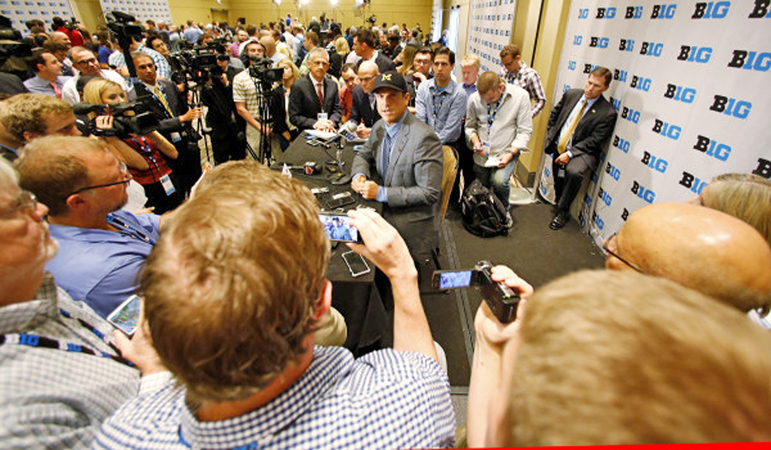 Harbaugh strode to the podium on Monday morning wearing a blue suit, a tie, dress shoes and a Michigan baseball cap. Two hours later when he sat down for a small-group interview, the cap was still part of his attire.

“I haven’t had a haircut in about five weeks,” Harbaugh said when asked about it.

“I don’t know. I wear suits and ties when I go to weddings. They said I had to wear a suit today. I just felt more comfortable with the hat and I like the “M.” There were multiple reasons,” he said.

What goes on underneath Harbaugh’s hat is often a puzzle. And he seems to like it that way.

“He thinks outside the box,” Butt said. “A lot of us might not understand everything he does but I can assure you that there is a reason for everything he does. He has a plan. He is doing most of the things for the betterment of our team.”

One of his recent ventures outside the box to publicize Michigan football was recording a rap video.

“My default is usually yes,” Harbaugh said. “Why not? And the reaction has been very good. I’ve gotten multiple texts, phone calls, comments from people that really liked it. I think the cool people liked it.”

Butt said his coach is “probably the most competitive person I’ve ever met and probably ever will meet.”

Even some ultra-competitive people might have been less combative than Harbaugh was after going a somewhat unexpected 10-3 in his first season at Michigan last season.

He battled the NCAA over holding satellite camps across the country and took verbal shots at Alabama coach Nick Saban and Ohio State athletic director Gene Smith on Twitter.

In March, Smith told an interviewer who asked about Harbaugh’s satellite camps, “If we were trying to jump start our program, I’d probably do that too.”

Harbaugh fired back on Twitter by saying, “Good to see Director Smith being relevant again after the tattoo fiasco. Welcome back!”

Asked about that on Monday, he said, “I’m going to put that in the category of someone who shoots one over your bow, you shoot one back.

“Usually I subscribe to a sticks and stones may break my bones but words will never hurt me philosophy. But when someone talks about someone or something you love or makes a personal attack, then you have the right to shoot one back across their bow,” he said. “Someone made a joke about our program and I fired one back over their bow.”

In the shots over the bow on the football field category, Ohio State is up 1-0 on Harbaugh after its 42-13 win at Michigan last season.

Michigan comes to Ohio State on Nov. 26. It will be the first time Harbaugh has competed against OSU in Ohio Stadium since 1986 when he guaranteed a win over the Buckeyes and led the Wolverines to a 26-24 win there.

Harbaugh sort of dodged the question when asked what it would be like to go back to Ohio Stadium.

“As far as going there to play this year, we’ll be excited about it. I just talked what that feeling is like – beating a good team on the road in a big stadium and you’ve got some weather in there, that’s the ultimate. There’s no better feeling in life,” he said.

By Billy Bruce For The Tribune   From 2001 through 2004, former Ironton standout Jason Harmon excelled as a free... read more