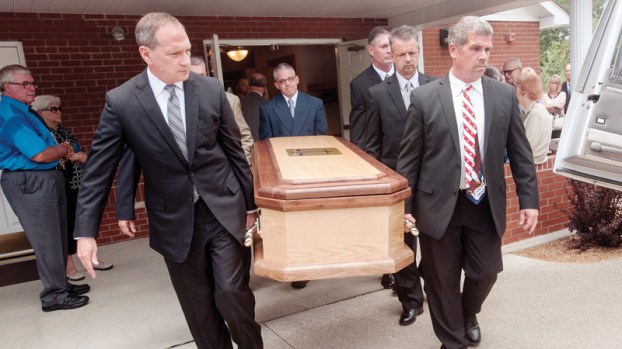 As family, friends and colleagues came to say goodbye to Lawrence County Common Pleas Judge D. Scott Bowling, the sentiment was clear that the judge wasn’t leaving his home. He was going to it.

Josh Campbell opened the funeral, Friday at Oakland Chapel Church, with the Chris Tomlin song, “I Will Rise,” and even though the audio track failed, Campbell continued to sing, with those who knew the lyrics joining in.

“And I will rise when he calls my name. No more sorrow, no more pain. I will rise on eagles’ wings, before my God fall on my knees and rise. I will rise.”

Bowling’s home church was at capacity by the time the service started. Two monitors flanked the outside aisles of the sanctuary, displaying photos from five decades worth of memories: A young boy blowing out the candles on his birthday cake; a teenager posing with his prize-winning county fair hog; a young man on his wedding day; a father holding his sons; a judge taking office; a missionary spreading the word of God; many, many others.

First to eulogize the judge, who died last Sunday evening, was his friend of 46 years, Gene Patterson.

Patterson shared memories of hiking, camping, hunting and participating in 4-H with Bowling. He told a story of the two jumping from a bridge into a creek, a memory recalled last week before Bowling died.

“I asked him, ‘Do you remember when we jumped off the bridge?’” saying Bowling winked and smiled in affirmation. “… ‘I know you’re getting ready to jump again and it’s going to be like it was then. You’ve got to promise me you’ll be waiting on the other side to help me up.’ And he will.”

Bowling was diagnosed with amyotrophic lateral sclerosis — commonly known as Lou Gehrig’s Disease — in 2012. Since then, he continued his work as a common pleas judge, continued his missionary work with Jeremiah 38 Ministries, which he helped to found, continued to organize the annual Life of Christ play, and wrote a book, “Does God Want Me Dead?”

Patterson read a passage from the book, in which Bowling described “life here on Earth presents us with precious few perfect moments,” and that those moments were “intended to heighten our appetite for Heaven.”

“Scott was never bitter,” Patterson said of his ALS diagnosis. “Yes, he was sad that he was leaving his wife and boys … But not for himself.”

Next to speak was Paul Fulks, a friend of Bowling since high school. Fulks said the two played sports together after he transferred to Symmes Valley High School and went to college together to study medical technology at Rio Grande. While commuting each day together, Fulks said he “witnessed his unselfishness.”

Even though Fulks moved to Texas about 27 years ago, he said their friendship only became stronger.

“We have witnessed the most true definition of unwavering faith we will ever see,” he said.

Last to speak was Lenny Campbell, pastor of Oakland Chapel. Campbell said he remembered in 2009 when Bowling told him he was being called by God to do missionary work.

“He began to die, but not in a bad way,” Campbell said. “We, as humans, think way too much of ourselves. … He began to die in his plans and excel in God’s will. He did more from then to now than most people do in 100 lifetimes. Why? He chose to die.”

Bowling was laid to rest in Aid Cemetery. The casket was hand-built by his brother, Jeff, from wood from their family farm.

The outside lid featured the scales of justice, while the interior was stitched with one of Bowling’s favorite Bible verses: John 17:24, “Father, I will that they also, whom thou hast given me, be with me where I am; that they may behold my glory, which thou hast given me: for thou lovedst me before the foundation of the world.”

Dow to shut down

HANGING ROCK — Approximately 30 employees will be affected with the sudden closing of the Dow Chemical plant in Hanging... read more