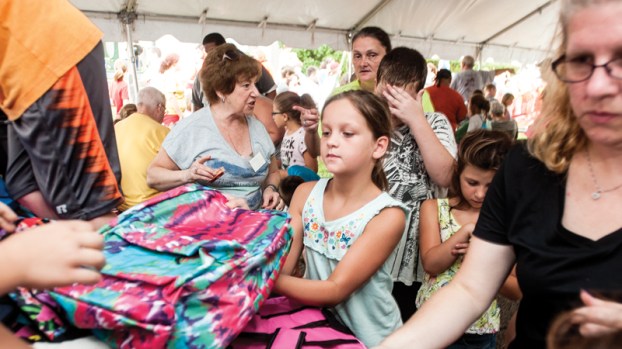 Eight-year-old Shyannea Douglas picks out a tie-dye backpack during Tools 4 School on Saturday, sponsored by the St. Paul Lutheran Church in Ironton.

More than a giveaway

Seven-year-old Haley Perry waited patiently as her friend Avalon Mankins, also 7, was fitted for her balloon tiara. That was thanks to Greg Goode Sr., face painter and balloon artist who was showing off his artistry to a crowd of children.

Soon Haley got her crown as well and both got to spend the rest of the morning playing princess.

The two Rock Hill students were down at Center Street on Saturday as part of the annual Tools 4 School event hosted each year by St. Paul Lutheran Church. Under a tent at the corner of Center and Sixth streets carloads of backpacks filled with class-appropriate school supplies were given away.

The annual event started in 2005 and since then 19,000 backpacks have been distributed to students K-12.

While the traffic to the tent was constant, the lines of parents and children were not as long as in past years only extending from Sixth to Fifth to the alley by the sheriff’s office. In the past the line —four to five deep — would snake down Fifth to Park back up to Sixth.

Soon-to-be South Point sixth grader Dallas Turley was near the giveaway tent showing off the black backpack he just picked out to a local television news cameraman.

“I think my friends will be really jealous,” Dallas said looking straight into the camera. “This is cool.”

Each year St. Paul teams up with its Worthington counterpart, All Saints, whose congregation provides half of the filled bags.

“We’re very happy to be here,” Muriel Erickson from All Saints, said as she took a break from handing out supplies.

Erickson has come down to Ironton for the past six years.

“It makes me feel good to help others,” she said.

Along with the giveaway was a street festival put on by First United Methodist Church with inflatables and free hot dogs and chocolate chip cookies.

For the second year in a row Ashland-based Ambiance Salon had set up barber chairs to give free hair cuts to all students. Owners Tabitha and Eric Coyer are parishioners at First United whose pastor, Caleb LaFond suggested the salon offer the hair cuts.

St. Paul’s comparable sense of outreach is what attracted John Popp and his wife to join that congregation.

“It is going beyond our walls,” he said. “It is what we all need to do. It’s taking the message of Christ to people through book bags.

Lawrence County EMS had a record month this July with 1,013 runs. That is compared to the approximately 900 that... read more