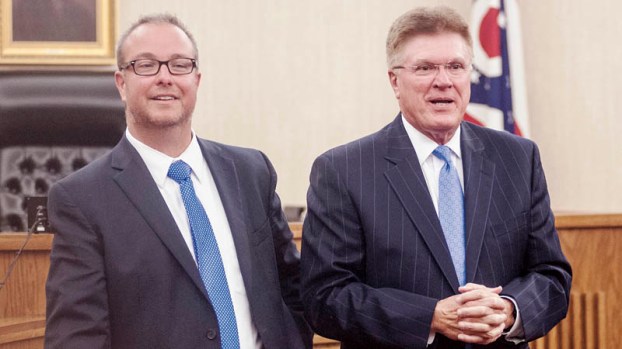 Collins to run for Bowling seat

For at least the second time in Lawrence County political history, there will be father-son entries in the November election.

On Tuesday, Ironton Municipal Judge O. Clark Collins Jr. was nominated by the Republican Central Committee to be on the ballot to run for the unexpired term of the late Lawrence County Common Pleas Judge D. Scott Bowling. Bowling died on July 31 after an almost four-year battle with ALS. Since he died more than 40 days prior to the fall election, his seat will be on the ballot.

“I’m excited about it,” Collins said after the meeting. “It is an opportunity.”

The nomination was made by party chair Ray Dutey and seconded by Mary Lee Kennedy.

Dutey then said he wanted to discuss campaign strategy as far as absentee ballots.

Collins, 69, went on the municipal bench in 1981 and his term would be up next year. Since the Ohio Revised Code prohibits a judge from taking office at or after the age of 70, he would then no longer be able to run for any judgeship.

Now, if he wins in November, he can serve for four more years as a judge.

At the time the judge first ran for office, his father, Oakley C. Collins Sr., was finishing up his eighth non-consecutive term in the Ohio Senate.

Also in the fall Collins’ son Christopher, 31, is running for one of two seats up on the board of Lawrence County Commission. Christopher Collins will face Coal Grove businesswoman, DeAnna Holliday, for the seat currently held by commission president Les Boggs. Boggs was defeated by Collins in the Republican primary this past spring.

“We’ll run our own races,” Judge Collins said. “Christopher will have to run his campaign. But we will be at some of the same places.”

The local Republican the party had come under criticism from some for moving too quickly to have a central committee meeting to select its nominee for the Bowling seat, without giving what was termed respect for the late judge’s family.

Collins said he did not consider running for the office until after the judge died.

“The law says it has to be done in 10 days after the vacancy or 85 days before the election,” Collins said. “I have much respect for Judge Bowling and his family. He handled his illness with courage and grace.”

Also at the meeting Kevin Jeffries, Viviane Vallance and Dave Lawless were appointed to fill vacancies on the central committee.

The Democratic Party will meet on Thursday to determine if it will have a candidate for November.

Clinton pulls ahead of Trump in Ohio