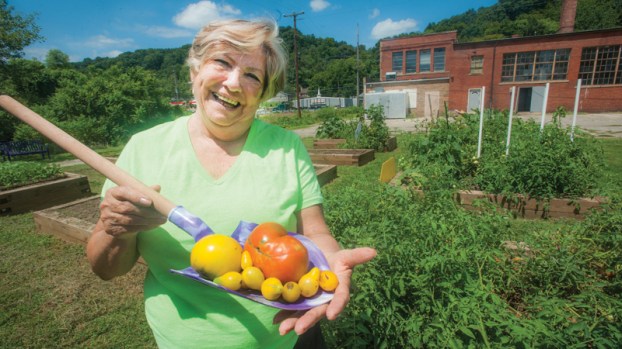 Ruth Damron, with the Chesapeake Community Center, shows off the center’s community garden, located behind the facility.

With summer about to enter its final month, the Chesapeake Community Center is winding down a successful first season of a new project.

A community garden was installed behind the building in the spring, featuring 12 planters and a set of new benches.

“They’re absolutely beautiful,” director Ruth Damron said. “I think the gardens are the best idea we’ve had yet.”

Damron said the garden was constructed with grant money, courtesy of the Ironton-Lawrence County Community Action Agency and Cindy Anderson.

The area is still a work in progress, and tables, a bike rack, and a Bar-B-Q grill will be added to the project soon.

Damron said that, including herself, about eight people had crops growing this year, including, tomatoes, potatoes, squash, cucumbers and beans.

The adjacent Sybene-Chesapeake Community Center had planters in the garden they maintained as well, Damron said.

She said the produce was available to anyone who wanted it.

“We have people who walk the track in the evenings, and they could help themselves,” she said.

She said the garden is maintained by those who plant there.

“I hoed tomatoes with my handy, dandy shovel,” she said.

Damron said plans are underway to repeat the project next year.

“We have a guy across the street who wants to plant garlic and kale,” she said. “And some people already have things planted for next year.”

Photographer focuses on documenting the unknown Capturing the stranger on the street is what captivates self-taught photographer Abby Kuehne, of... read more