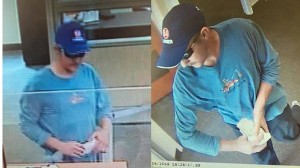 Courtesy of Ironton Police Department
These photos show a man police said allegedly robbed the PNC Bank for an undetermined amount of cash on Tuesday afternoon.

Ironton police are investigating a robbery, which took place at PNC Bank on Tuesday afternoon.

According to information released by the department via social media, a male suspect entered the bank and allegedly threatened to use a gun.

Police said he escaped with an undetermined amount of money.