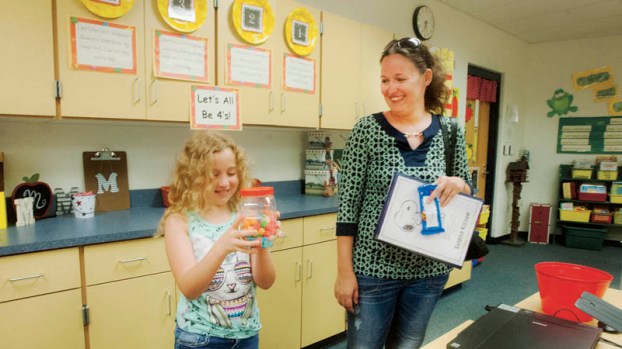 Eight-year-old Selena Kizzee and her mother Deirdre Thacker, attempt to guess how many gum balls are in a jar during an open house at Burlington Elementary.

BURLINGTON — Students returning to Burlington Elementary later this week got a preview of the school year during an open house at school on Tuesday.

School starts on Thursday and parents and children got a tour of their classrooms during the event.

“They get to meet with their teachers and find out where their homerooms are,” principal Sarah Nuckols said. “If they have school supplies, they can bring them in and put them in their desks. It’s a getting-to-know-you event, and they can talk about school.”

One of the returning students was Gregory Reynolds, of Burlington, who will be attending the second grade.

“Kind of,” he replied, when asked if he’s excited to come back to school, after a summer he said he spent swimming.

Meanwhile, Kennedy Vance, who will be in Amanda Clay’s second grade class, answered with a “yes.”

Clay said she was eager to get back into teaching, as she met with her new students and their parents as they stocked their desks with supplies.

In the same wing, Angie Heffner was getting ready to teach first grade for the year.

In preparation for the coming year, she had renovated the classroom’s tent, covering it with paper bark and foliage to make it into a treehouse from the Berenstain Bears books.

She said the open house is a helpful way to get students back into the swing of things.

“We meet with parents and discuss concerns,” she said. “And we meet with students. It helps to ease their worries. I think it’s great.”

On the other side of the school, which houses the older students, Lara Leach was getting ready to teach a split class of fourth and fifth graders, a few of whom greeted her with a hug.

She taught third grade last year and said that many of the students, including her daughter, Avery, have been in her class a few years in a row.

“Some of them, I’ve had in my class for three years,” she said. “It’s really more of a reunion and getting to see familiar faces again.”

While some students, beginning kindergarten may find it hard to adjust being away from their parents for the first time, it can be equally tough for the parents to part with their young ones.

As a result, Nuckols said the school will host a “Boo-hoo Breakfast” for the kindergarten parents at 9:30 a.m. on Thursday.

Burlington was not alone in hosting the event. Chesapeake Elementary also had an open house on Tuesday, while South Point Elementary hosted a back-to-school night, where students could meet the school’s mascot, Old Blue, and parents could sign up for PTO.