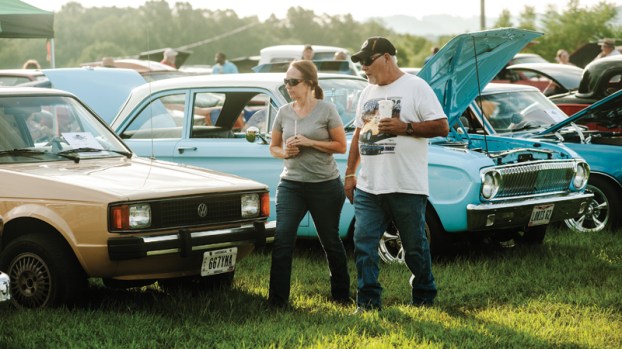 Each year but the first, part of the Rally on the River festivities is a car show at Ironton Hills Plaza, which took place on Friday, where classic car owners and enthusiasts filled the field for the event.

“We usually find the hilltop a nice place to do it because of all of the grass and space there is,” Bob Cleary, one of the organizers of the event along with Stacy Morgan and Rick Rogers, said. “The turnout has been good. There’s been a threat of rain all day and the heat, but we’re all very pleased with the turnout.”

Registration began at 3 p.m. Friday with the show running from 6-8 p.m. Those who registered a car into the show received a wristband good for the whole weekend of Rally on the River, a dash plaque, a chance to win trophies for their cars and door prizes.

“We give away about $2,000 worth of door prizes and more than $1,000 in trophies,” Cleary said. “And we try to have something for everyone with a 50/50 drawing, T-shirts and free inflatables for the children.”

“We always try to do some different things every year and improve,” Cleary said. “We’re very pleased with how it’s gone this year.”

Down the street at the Rally grounds, the Friends of Ironton hosted a pig roast Friday, which was free for law enforcement, in the parking lot next to the Ro-Na Theater and vendors are open all day each day selling everything from leather bike gear to helmets to food to tattoos.

Jason Williams, of J Sure Will Tattoo, and Aaron “Country” Martin, of Ink by Country, both out of South Shore, Kentucky, were set up for people who wanted to receive tattoos.

Get your motor running

First night of Rally kicks off with trio of rock bands Hundreds of people had already filled the grounds by... read more