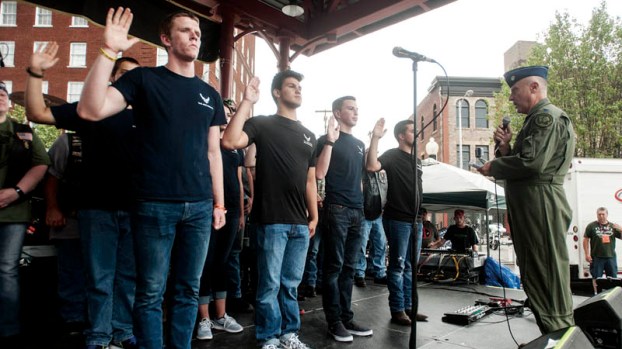 Young Air Force cadets take the oath as they officially enter into the military during a military tribute Saturday during Rally on the River.

Seven young people stepped onto the main stage at the Rally on the River to start a journey of serving their country.

As part of the Tribute of Heroes, the swearing-in pledge was given to these young people, who are all joining the Air Force.

Just before the ceremony, they practiced the choreography of military marching. Then, their cue was given and they marched onto the stage to raise their right hand as Lt. Col. William Campbell, a 30-year Air Force veteran, gave the pledge to cheers from the crowd.

The sole Lawrence County native was Dylan Johnson, 17, who said he is dedicated to serving his country. In the audience was his mother, Lori Johnson.

Eric Timberlake, 19, of Greenup, was proud to have the swearing in ceremony part of this year’s Rally.

“I want to get an education,” he said.

Michael Shullick, 18, of Lewis County, Kentucky, joined his colleague in feeling honored by the event.

“It is a very great ceremony,” he said.

Both Brenton Allwod, 18, of, Wheelersburg, and Elijah Montoya, 18, both joined the Air Force from the inspiration of their grandfathers.

The only girl in the group Alexis Blair, 18, of Wheelersburg, who, like her friends, wants to serve her country.

Crowds enjoy Friday activities, acts   Each year but the first, part of the Rally on the River festivities is... read more