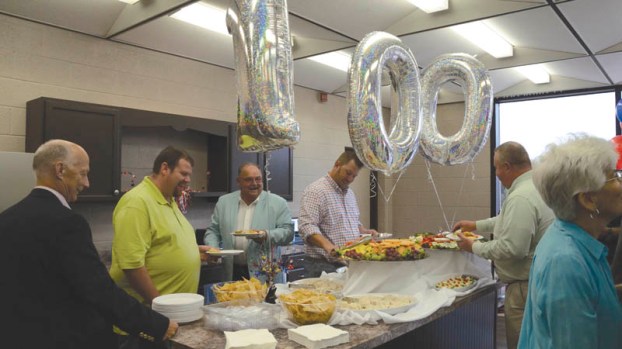 WORTHINGTON, Ky. — A growing Tri-State business opened its doors to local community leaders on Thursday to mark a milestone.

Portable Solution Group hosted an open house at their Worthington, Kentucky plant to mark the occasion of reaching 100 employees.

According to the company’s news release, Portable Solutions is the parent of Industrial Sanitation, Johnny on the Spot, Storage on the Spot, Dropbox Inc. and Modular Security Systems Inc., and focuses on the worldwide, building, sale and rental of jobsite construction products.

Officials from Ironton, Worthington, the Ashland Alliance, Ashland Community and technical College and other groups mingled upstairs to celebrate the company’s success.

“It’s a big deal,” Mark Fields, the plant’s manger said. “We’re actually now at 110. We’re seeing the culmination of a lot of projects.”

He said the company, founded by Rob Slagel, of Ironton, has been at its current location for eight years, and is considering opening a second facility.

“We started with one owner, by himself,” Fields said. “A lot of folks helped us succeed, and we appreciate those who helped us get where we are.”

Among the crowd of regional leaders was Juli Stephens, the field representative for U.S. Rep. Bill Johnson, R-Ohio.

“We work with this company a lot with regulations,” she said, pointing out that many of the employees at Portable Solutions are from southern Ohio and citing the company’s ownership by an Ironton resident.

Fields said one of the company’s biggest clients is the petrol and natural gas energy, to whom they provide modular solutions.

They also own a patent for many modular access control portals including one being developed with the U.S. Department of Homeland Security, for use on scanning shipments coming into the country, which could carry radioactive materials for a dirty bomb or nuclear weapon.

The portal, constructed from a metal shipping container, contains equipment to scan incoming shipments from all sides.

“It’s a good way to repurpose these,” he said of the shipping containers, which he said there is no shortage of.

“It hits the box from all sides,” Fields said, showing the equipment, now at the site, and ready to be installed in Tacoma, Washington and Virginia.

He said they hope to produce more, noting that only 5 percent of shipments into the country are currently being scanned.

“Congress wants to get that up to 95 percent,” he said. “We’re really proud and excited to be part of something that’s protecting the country, from this little spot in Kentucky.”