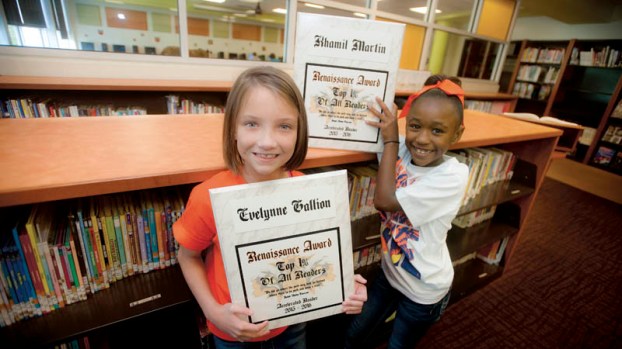 Ironton Elementary School students Evelynne Gallion, left, and Khamil Martin, right, proudly displays their plaques after being receiving the Renaissance Award for being in the top one percent of all readers.

Ironton Elementary School principal John Maynard called two students to his office on Friday morning, but not because they were in trouble.

Third graders Evelynne Gallion and Khamil Martin, both 8, received Renaissance Award plaques from Maynard for their accomplishment of ranking in the top 1 percent of all readers last school year in the Renaissance Learning Accelerated Reader program.

Maynard added that about 1 million students read in the program, so ranking in the top 1 percent is extremely special.

The program involves reading as many books as one can in 155 days, extending almost from the beginning of the school year to the end. Each book that they read has corresponding points that get added up at the end.

“These children are the top two of all time that I’ve ever seen,” Maynard said. “They gave up dinners, TV shows and other activities to read.”

Gallion, who scored 787 points, and Martin, who scored 538 points, both said that winning the award means a lot to them.

“I’m very happy and proud,” Gallion said of her accomplishment. “I usually read for an hour a night, but sometimes I did more, and we also read in class.”

Gallion said that the Harry Potter series by J.K. Rowling and the Warrior Cat series by Erin Hunter were her favorite books that she read.

“It just makes me feel happy,” Martin said. “My favorite books that I read were ‘Million Dollar Shot’ and ‘Diary of a Wimpy Kid.’”

The Accelerated Reader program is open every year for elementary school children, and both said they are going to participate again this school year.