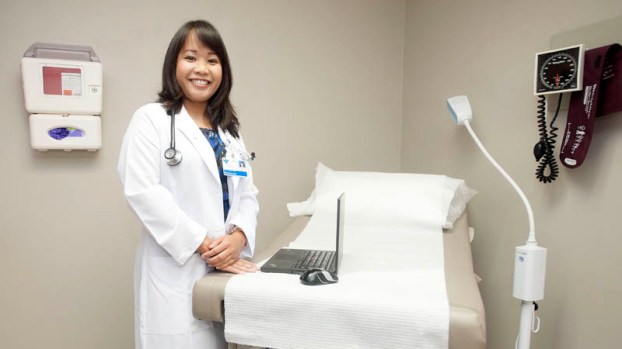 Thuy Nguyen, who works as a primary care physician in family medicine at Bellefonte Primary Care in Ironton, has overcome many challenges to get to where she is today.

Thuy Nguyen, who works as a primary care physician in family medicine at Bellefonte Primary Care in Ironton, has overcome many challenges to get to where she is today.

The oldest of five siblings, they came to United States from Vietnam in 1997, along with their mother and grandmother, when she was 17 years old.

She said the family lived “in squalor among farm laborers” in California when they arrived, and she took her first job, picking peaches.

“I didn’t speak English at the time,” she said.

However, through hard work, she said she was able to find hope and see an opportunity.

“I took a course in English as a second language,” she said. “I spent three years learning the language — learning things like, ‘This is a table, ‘This is a chair’ and ‘How are you?’”

She spent two years in junior college and then transferred to University of California, Davis, where she spent another two years studying biochemistry.

“I loved school and I always wanted to do something with medical,” she said.

After talking to a friend of hers, who was a doctor, she took the MCATs and entered medical school, attending the West Virginia School of Osteopathic Medicine in Lewisburg in 2008.

During her first year in medical school, she worked on a one-week medical mission to Tegucigalpa, Honduras, working alongside a family practice physician from West Virginia. In this area, she said doctors were unable to rely on first-rate imaging or information from labs, and she learned the importance of trusting her clinical judgment based on a patient’s history and an examination.

In 2010, she continued her education at Our Lady of Bellefonte hospital in Russell, Kentucky, for another two years. When she graduated in 2012, she came back to Bellefonte for a residency.

“They loved me and I loved them, so I stayed,” she said. “I’ve been here for four years. I love to help people, and the people are nice.”

She said the greatest challenge for her has been the fact that English is her second language, though she speaks it as natural and fluently now as anyone in the region.

“It’s getting better,” she said of that obstacle. “Although after I moved to West Virginia, I learned that people speak it differently there.”

Nguyen says her family is still living in California and that two of her siblings are now in school.

“I’m here by myself,” she said of her move to Ironton, where she attends St Joseph Catholic Church and is involved in charity events through the hospital.

Of her own journey, she said it does make her sad sometimes to see people in the U.S. who take what they are offered for granted.

“So many young people have opportunities and they don’t see how they are blessed,” she said.

Of her job in the medical field, Nguyen said her favorite part is getting the chance to help others.

“I love helping the people I work with,” she said. “I work with many elderly people. I had an elderly grandmother who passed away, and I can see my grandmother in them. You can learn so much history in talking to them, and that helps me.”

Nguyen said her goal is to serve those who live in an underserved are or are unable to afford care.

“It is not about making money,” she said. “It is not about getting rich. It is about helping those in need, medically and psychologically and, honestly, not expecting anything in return. But that is the reward in and of itself — going to bed every night, knowing that you helped somebody.”

Woman turned tragedy into way of helping others

On Sunday, Feb. 18, 2007, just 25 days after two Ironton Middle School students were killed by a train near... read more