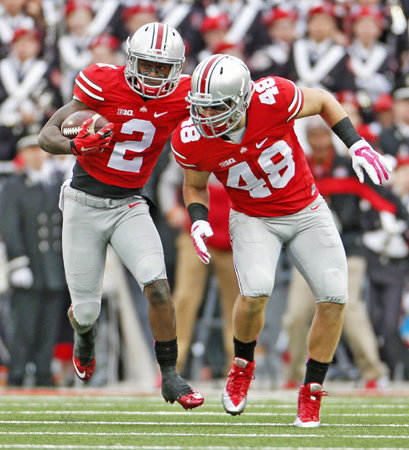 Ohio State Buckeyes’ senior linebacker Joe Burger (48) isn’t on the depth chart but that didn’t stop teammates from electing him as one of the team’s seven captains for the 2016 season. (MCT Direct)

COLUMBUS (AP) — When Ohio State announced its seven captains, the names were familiar and fairly predictable. Except for one: Joe Burger.

Those who haven’t studied Ohio State games closely over the past three seasons probably haven’t heard of Burger, a senior backup linebacker who walked on and finally earned a scholarship this summer thanks to his work ethic, gritty determination in practice and relentless effort on special teams.

Coach Urban Meyer loves guys like Burger. Great student, wonderful attitude, a charismatic natural motivator respected by everyone. Now Burger’s teammates have recognized his effort by voting him a captain alongside the team’s six returning starters from last season.

“As good a guy as there is,” Meyer said.

Burger is a Cincinnati product who had scholarship offers from other big schools — including Saturday’s opponent, Bowling Green — but decided to walk on at Ohio State instead. He’s played in 34 games over the past three years and has a grand total of three tackles. His biggest play as a Buckeye was last year when he brought down Indiana punter Erich Toth for a 3-yard loss on a fake punt attempt. Ohio State was trailing by 7 at the time and eventually won the game 34-27.

“My name was on the sheet, but I had no idea how it was going to turn out,” he said of the vote. “When I heard coach Meyer call my name, it was just one of those feelings that you really can’t describe. I’m forever grateful to my teammates, and I’m blessed to be around such a great group of people every single day.”

And you get the idea he means it.

Middle linebacker Raekwon McMillan said Burger is a team leader, regardless of how often he’s on the field. His role this year again will be special teams.

“I’ve learned a lot from Joe Burger myself as a linebacker, just the leadership traits he has on and off the field,” said McMillan, who is also a captain. “He comes in day in and day out and always does what he’s supposed to do. Some guys are physically more gifted than him, but he always finds a way to win.”

Burger said the selfless standard set by the team’s best players enabled a guy who’s not even on the depth chart to be elected a captain at one of the most elite programs in the country.

“I think they kind of set the standard and said hey, we respect the people who work hard, we respect the people who come in every day with a smile and make others around them better,” Burger said. “So I think those guys are instrumental in allowing this opportunity for my teammates to select me. I think it sets a great example that you don’t have to be a superstar on the field in order to be a leader.”