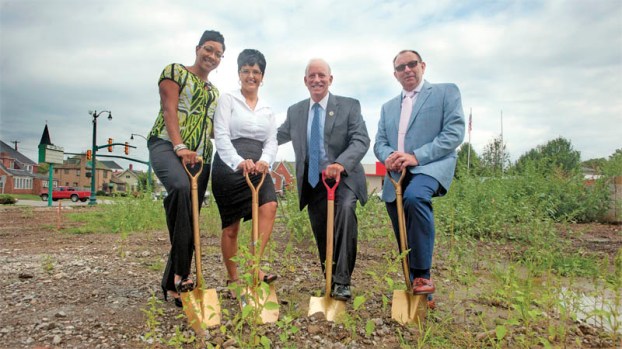 The first step was made Thursday toward bringing a popular West Virginia restaurant chain to Ironton.

A groundbreaking ceremony took place at the corner of Sixth Street and Park Avenue, which will be the location of a new Tudor’s Biscuit World.

Clark said he anticipates the restaurant to be complete and hosting a grand opening ceremony by the end of the year.

“We plan to use all contractors and workers to build the new Tudor’s,” he said. “We believe in Ironton and are making an investment in the city. We’re sure it will be a wise investment for Ironton and the people who live here.”

The location will be the third in Lawrence County for Tudor’s, joining the company’s Proctorville and South Point restaurants.

Other nearby Tudor’s franchises can be found in Scioto County, in New Boston and in Ashland, Kentucky. Christina McCune, the marketing director for the chain, said Tudor’s plans to expand more into the region in coming years.

Unlike many of the chain’s locations, which share space with another West Virginia company, Gino’s Pizza and Spaghetti House, the Ironton Tudor’s will be a standalone restaurant.

Tudor’s, named for original owner John Tudor, is based out of Nitro, West Virginia, serves specialty biscuits, including the Rocket, Mary B, Tootie and Peppi, as well as many named for West Virginia sports teams, such as the Thundering Herd and the Mountaineer. The restaurants serve other breakfast items, like the Big Tator Platter, pancakes and omelets.

The majority of Tudor’s restaurants are located in West Virginia, and the company also has several locations in southern Ohio and Kentucky and one in Panama City, Florida. Most of the restaurants are now owned by current CEO Oshel Craigo.

Calling it a career

Jo-Lin nurse retires after more than 30 years with center After 54 years of nursing, with 34 and a half... read more