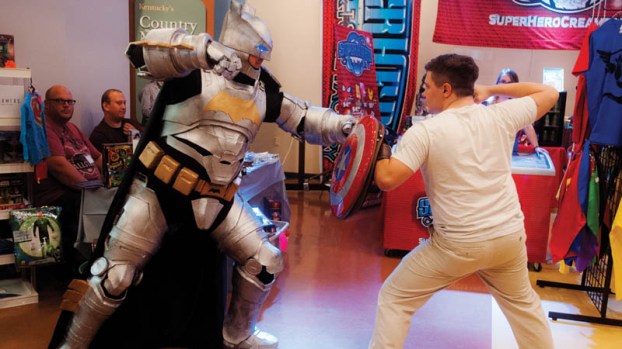 ‘We can be heroes’

Heroes, villains, families and more turned out on Saturday for the Highlanders HeroCon at the Highlands Museum and Discovery Center in Ashland.

“We had it last year, and it was just an overwhelming success,” she said. “This year, we have almost 30 vendors here, as well as the characters, who are telling their story.”

The event featured attractions, such as an animal show by Gary Bussa of Des-Coveries Wild Animal Shows, a forum on cosplay and a visit from Batman, Batgirl and the Hopemobile from Heroes 4 Higher.

Throughout the crowded event, attendees could be seen in costumes such as The Joker, Harley Quinn and Lobo from DC Comics, Jean Grey and the Black Cat from Marvel Comics, members of both incarnations of the Ghostbusters and various characters from Star Wars.

Vendors sold comics and toys from booths while local and regional comics artists sold their work.

One of them was Beau Smith, a Marshall University graduate from Kenova, who is likely the most accomplished comics professional living in the region, having worked for DC Comics, Image Comics and IDW Publishing. A television series based on his creation, Wynonna Earp, airs on the SyFy Channel and has been renewed for a second season.

Smith was one of the guest speakers, along with Michael Mayne, of Portsmouth, the creator of the comic “Bonnie Lass” for Red 5 Comics.

Coming from farther away was Tim Fuller, a Portsmouth native who now lives in Cincinnati. He has been working in comics since the 1970s, beginning at the defunct, but legendary Charlton Comics, where he contributed to series such as “Zombie Marge” and “Cap’n Catnip.”

He has continued to write, pencil and ink his creations through his self-published efforts.

“I outright own my work,” he said, noting that Charlton had returned his original art.

One of his projects is “Sham Comics,” in which he takes Golden Age books that have fallen into the public domain and gives them a new twist.

Another of the guest speakers was Cammie Eicher, of Ashland, a paranormal author who also writes under the name Cat Shaffer. It was her second appearance at the convention.

Eicher said she specializes in urban fantasy and suspense and has been writing since the late 1990s.

Her “Shadow Ancient” series began in 2010 and is now up to its eighth book, put out by Resplendence Publishing.

“It’s about a vampire clan,” she said. “I show where their society intersects with ours. It’s vampires, but with a different take. My vampires don’t stalk or kill.”

She was also selling copies of “Academy of Losers,” a young adult novel about a girl who is born without supernatural powers in a world where everyone has them and is sent off to a special school.

Allen said the event was especially popular with families, drawing everyone from “newborns to grandpas.”

“I’ve heard so many interesting stories from people,” she said. “People from all walks of life love this. Some of them have collected comics for years and years. It’s clean wholesome fun and we’re thrilled to bring it to the community.”

Allen said the event got a major boost from two comic stores, The Inner Geek and SuperHero Creamery, which have opened in Ashland in recent years.

“The whole community has joined in helping us,” she said.