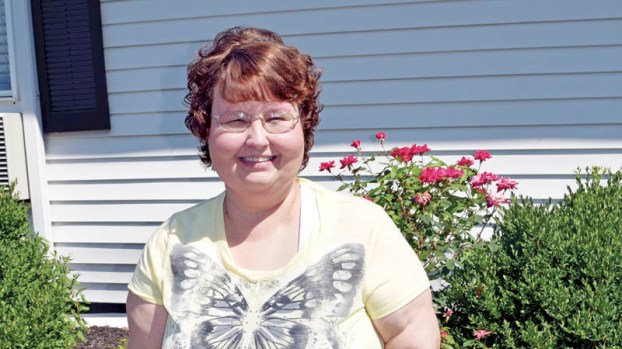 Martha George, 43, learned to walk at Crystal Care Nursing and Rehab Center after being wheelchair bound for nine years. George, who has MS, moved out of the center on Tuesday to her own apartment.

On her own 2 feet

Woman with MS walking after 9 years in wheelchair

About seven months ago, Martha George was wheeled into Crystal Care Nursing and Rehab Center in Coal Grove, unable to walk or brush her own teeth.

On Tuesday, she walked out of the facility on her own two feet, ready to take on the world and make up for lost time.

And that lost time was much more than seven months.

George was diagnosed with multiple sclerosis when she was just 27 years old.

MS is a disease in which the body’s immune system attacks the protective covering surrounding the nerves of the central nervous system. Symptoms vary and each person’s symptoms can change or fluctuate over time. Common symptoms include fatigue, vision loss, weakness, numbness, walking difficulties and cognitive changes.

Eventually, doctors found lesions on her brain and spine and diagnosed her with MS.

The Ashland native, who has a degree in early childhood development, was working in Lexington, Kentucky, but had to leave work to move in with her parents when she was 34 years old.

“At that age, it was hard,” George said. “I was so independent. I hated to ask for help for anything.”

In 2013, At the age of 39, having lost her mother, as well as her father a few years prior, George was admitted into a nursing center in Lexington.

Her disease had progressed to the point where she couldn’t walk or even sit up in bed by herself. George said she felt like giving up.

“They wouldn’t work with me,” she said. “I thought I would be in a nursing home the rest of my life.

“I looked online and found this place,” she said of Crystal Care, formerly Sunset Nursing Center, in Coal Grove.

George said she spoke with then social services representative Lisa Welton, who gave her some much-needed encouragement.

“She told me I don’t belong in a nursing home,” George said.

Once George transferred to Coal Grove, she found that was the attitude of the entire staff, including aide Melissa Rutt.

“We had been told she would never walk again,” Rutt said. “I know we were like, ‘No, you’re too young. You are going to walk.”

At 43 years old, George began to learn how to walk again. She started on a new course of medication. She started hopping with the use of a walker, she said, and doing physical therapy for her entire left side.

“John taught me how to hop on my right leg,” George said of her physical therapist. “John said, ‘You can walk. You can do this.’”

Rutt, she said, also helped her use her walker, even on the midnight shift.

George lifted weights and did strength-training exercises and was eventually able to do more tasks on her own, like take a shower. She also said she started helping with the laundry and housekeeping as she was able.

After nine years in a wheelchair, George has taken a few more steps to regaining her independence. With her MS in remission, on Tuesday, she moved out of the nursing center to her own apartment in Ironton. She got a full-time job working at Super Wash Coin Laundry.

“She (Sue Rodriguez) gave me a chance even though she knows I could relapse,” George said.

George said it is in the back of her mind that she could relapse, but that she will continue to take things one day at a time.

She said she is looking forward to being able to do many of the things most people take for granted.

“Going shopping, going to a restaurant out to eat, being able to have a pet,” she said. “Going grocery shopping, having my own money. I’m hoping to volunteer here (Crystal Care) just to give back a little of what they have done for me.”

While the staff praises George as being determined, George said without all the support, she wouldn’t have made such progress.

“I never thought, seven months ago, this would be possible, if it wasn’t for all of those who helped me.”

To celebrate, staff members took George out to dinner at Cheddar’s in Ashland.