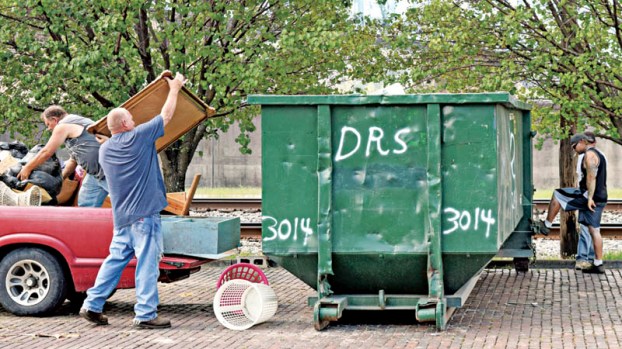 Residents unload items to a dumpster during the Ironton citywide clean-up.

Ironton’s citywide clean-up wraps up today and organizers are calling it a success.

Dan Palmer, of the Lawrence-Scioto Solid Waste Management District said that, as of noon Thursday, they had filled the roll-off dumpsters, stationed on Bobby Bare Boulevard by the Ironton Farmers Market, 14 times.

“It has been nonstop,” he said of the flow of people dropping off items. “People have been thanking us for doing this.”

The event, in its first year, began Tuesday and was organized with the district and the city of Ironton, as a result of the district receiving a $20,000 grant for tire and litter clean-up.

The district sponsored several tire drop-off sites throughout Lawrence and Scioto counties prior to the Ironton clean-up.

Palmer said the participation has exceeded his expectations.

“I’m amazed at how much we’ve had,” he said. “On Tuesday, when we started, there were cars lined up, and they didn’t quit.”

He said people had continued to drop items off at night, while the dumpsters were full.

As the dumpsters reached capacity, they were taken to Big Run Landfill outside of Ashland.

Palmer cited the help of one Ironton worker in particular.

If it wasn’t for him, with his big inloader, we couldn’t have done this,” he said of Rick Jenkins.

Rachel Murphy, of Ironton, was one of the residents dropping off items on Thursday, having cleaned out a garage recently.

“It’s mostly junk,” she said. “The garbage won’t take it. I thought I’d have to hire a dumpster. Thank God this came along.”

Ironton residents can continue to drop off large items until the event wraps up today. Tires, medical waste and hazardous materials will not be accepted.

A Household Hazardous Materials Waste Event will take place at Dow Chemical, located at 925 County Road 1-A, from 9 a.m.-1 p.m on Sept. 24, where Lawrence and Scioto residents can drop off chemicals, tires, computer equipment and have documents shredded.

Those dropping off are asked to provide proof of residency in the form of a driver’s license or utility bill.

Target opening date to be late November With the public opening of the new Ironton-Russell Bridge scheduled around Thanksgiving, workers... read more