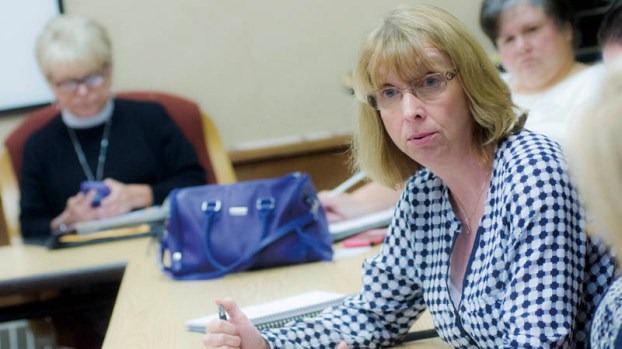 The inaugural meeting took place on Wednesday for a new group aimed at preventing suicide in Lawrence County.

Organizer Susan McComas, a coordinator with Appalachian Family and Children First, invited the attendees to share ideas and make plans.

Debbie Roach, a supervisor with Shawnee State Health Center said the first meeting was about polling community members together.

“This is brand new and we’re in the building phase,” she said. “We would like to have people who have overcome suicidal thoughts to join, as well as family survivors who seek to stop it from happening again.”

She said the group discussed plans for a 5K walk/run to raise awareness, booking guest speakers and applying for grant from Ohio Suicide Prevention Coalition for start-up funds. One of the school districts represented was Fairland, who are still mourning the death of a 10th grade girl at the school who committed suicide two weeks ago.

The group discussed plans that are in place to help schools see the warning signs of students who are suicidal, as well as trying to improve those efforts.

Randy Thompson, of Proctorville’s police department, said he spoke with the county coroner, and there were at least seven suicides reported in Lawrence County in 2015.

“But often times, you can’t tell it’s a suicide, because you don’t know,” he said, pointing out cases where officials are unsure if an overdose is accidental.

September is Suicide Prevention Month and a candlelight vigil is planned for 6 p.m. Saturday at Ohio University Southern, organized by Spectrum Outreach.

New character added to event Some rich history of Lawrence County will be showcased this Saturday during the annual Lawrence... read more