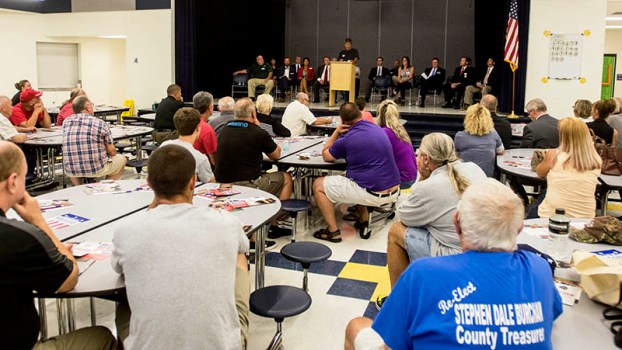 BURLINGTON — Candidates for local offices took their case to the voters at a forum on Thursday.

The Meet the Candidates event, organized by the Concerned Citizens of Burlington, took place in the cafeteria of Burlington Elementary School.

Voters heard from those running for countywide offices, as well as regional candidates and representatives on two Burlington/Fayette area ballot issues.

A similar event was organized by the Concerned Citizens in the spring for the primary election.

Dominating the forum were the elections for county commissioner, in which two contested seats will appear on the ballot.

The first to speak was Democrat Doug Malone, who touted his previous two terms on the commission.

“I’m running on my strong record of leadership,” he said.

Malone cited his work in signing off on the enterprise and empowerment zones that created The Point industrial park and creating the Lawrence County Port Authority.

Malone said action must be taken on the need for a new jail, and said the present situation “is bankrupting the county completely.”

Next up was Malone’s Republican opponent, incumbent commissioner Bill Pratt.

Pratt cited his lifelong ties to the area, as a 1991 Chesapeake High graduate and his second job as a dairy farmer.

“I’m a working man and I support working people,” Pratt said. “Twenty-four years ago, when I needed money to go to homecoming, my grandfather offered me a job of $5 an hour milking cows.”

Pratt said his focus on the commission was on the elderly, the youth and veterans. He said his top priority was emergency services, and that the county had replaced every EMS vehicle and purchased seven new cruisers for the sheriff’s office.

In the race to fill the second commission seat, currently held by Republican Les Boggs, who was defeated in the primary, independent candidate Jonathan Ater spoke first.

A Chesapeake High and Ohio University graduate, Ater is a retired teacher, farmer and former member of the AFL-CIO and CSX Railroad.

“The slogan of my campaign is ‘Had enough?’ and I have had enough,” he said.

Ater rejected the notion of independent candidates as spoilers, and said he is running against corruption in local government. He said it is “unhealthy” to have three people in the same party comprising the county commission, or for so many offices to go unopposed.

He said his priorities are to lower taxes, work with the county engineer “to get roads in top order so people can get to work” and to clean up the environment.

Next to speak was Republican Chris Collins, the assistant director of the Lawrence County Department of Jobs and Family Services.

“I’m running, because I want to make Lawrence County a place where my generation can live, work and raise a family,” he said.

Like the other candidates, Collins spoke of the need for new jobs and resolving the jail situation.

But the bulk of his remarks were centered around the opiate epidemic hitting the region.

“There are a lot of sick people in the county – a lot of people I grew up with,” he said. “We need to get the situation under control.”

Collins said the lack of good jobs in the region was a key factor in the problem.

“It leads to idle hands in the community, and you know what idle hands do,” he said.

Conversely, he said the reputation of a drug problem in the area keeps business out.

“Job creators don’t want to come here if they know the situation,” he said.

Democrat DeAnna Holliday, spoke next, citing her eight years of experience on the Dawson-Bryant School Board and her ownership of a local business.

“I can confidently tell you I know how to come with a business plan, manage a budget and work with people,” she said. “I’m proud to say I’m a citizen and taxpayer of Lawrence County.”

She touted her Lawrence County Open for Business plan, which she said is detailed extensively on her website.

“We need to work to bring jobs, so that our children and grandchildren will be able to have employment opportunities in Lawrence County,” she said.

She also outlined a plan for a “Law Enforcement Co-op,” which would allow villages and community officers to respond to sheriff’s calls.

On the drug epidemic, Holliday said more education is needed in the schools and that the county needs a drug court and rehabilitation program which would provide skills for offenders to re-enter the workforce after treatment.

“We’re the only county not using a drug court,” she said. “It’s vital to our recovery as a county.”

A graduate of Ironton High, Marshall University’s W. Page Pitt School of Journalism and the University of Kentucky’s law school, Ballard said he moved to Rome Township in 2004.

“What brought us back to this community was the ability to raise a family,” he said.

Ballard said he wanted to “dispel rumors” that he does not practice law in Ohio.

Ballard said he has kept and maintained an active practice in Ohio.

“I’ve tried jury cases in West Virginia and my last jury trial was in Ohio,” he said.

On the jail crisis, Ballard said that even if the winning candidate diligently pursued the issue, the earliest ground could be broken on a new jail was 2018 and that a solution was needed now.

He proposed the idea of treatment in lieu of sentencing, in the form of a drug court.

“Let’s put in place a system to take low level, nonviolent offenders and give them the opportunity to get their life back on track.”

He said the proposal would not apply to violent offenders or dealers and that treatment would not be “a slap on the wrist.”

“As a community, we should love thy neighbor,” he said. “We’ll kick them in the pants, tell them they’ve done wrong and then throw our arms around them.”

He said this method would also prevent people from having the stigma of a felony attached to them.

“We know how damning it is on an application, if they check that box that they’re a convicted felon,” he said.

Ballard said he was also running to tackle corruption.

“I don’t think it’s a surprise to many of you that we have corruption in government here,” he said. “We need to look at each candidate and determine where they stand morally. We have a duty to put the right people in office to do what we want.”

Ballard was followed by his opponent for the court, Ironton Municipal Judge O. Clark Collins.

Boasting 35 years on the bench, Collins spoke of his pride in his two sons, Justin and Chris, who is running for commissioner, as well as the lesson he learned from his father, Oakley Collins, who served for decades as state senator.

Collins took pride in his staff, cited his awards from the Ohio Supreme Court for superior judicial service and pointed out that he had the number one conviction rate for DUIs in Ohio.

“I’m proud of the fact that we’ve concentrated to get DUIs off the roads and reduced recidivism,” he said.

He said, upon taking the bench, there was a problem with too much plea bargaining for DUIs.

“We stopped most of that,” he said.
Collins said he was “a pioneer” in community service in the state of Ohio. He said at the time he became judge, “the city of Ironton was broke and we had to come up with something to help the city.”

He said the community service program he launched put people to work, doing tasks such as picking up litter or cleaning up cemeteries, instead of sentencing them to jail.

“There was nothing in the law when we started,” he said. “It’s a successful program, and I’m proud of it.”

Collins took issue with those who said there was no drug court in the county, citing a Drug Diversion Program in his court, which he said does the same thing.

“There’s nothing better than to have someone come back and say, ‘Judge, you saved my life,’” he said.

In the question and answer session following the candidates, Collins elaborated on the program, stating that it is part of the regular docket on the court. He said he prefers it to the idea of a “drug court,” which he said carries a stigma, and that he feels local judges should have discretion, rather than a grant-funded court program, which could take control away from the local level.

Judge Collins also addressed the subject of the judicial race itself, which he said is “pretty dirty.”

“If you’re out there, and you’ve heard someone saying things about people and how they have criminal records and everything else, myrecommendation is to make sure they are right first,” he said.

Judge Collins said his father, the senator,  did not engage in negative campaigning and he was following his example.

“I’ve never ran a campaign like that,” he said.

He said he is seeking his fourth term in the position.

“I’ve been in this county along time,” he said. “I love this county.”

He touted his success in reducing the amount of delinquent taxes in Lawrence County, stating that it had dropped from $14 million upon taking office to $4 million.

“We’re simply asking people to do what their neighbors do and pay their tax obligations,” he said.

“I’m adamant about everyone paying their fair share,” Burcham said. “That money goes to the schools.”

He said his office had also set up contracts and payment plans for those in financial difficulty.

“We’re helping people to stay in their homes and make payments,” he said.

He also took issue with the presentation of Ater, who accused several officials present of corruption.

“I didn’t realize I’m running against two people,” Burcham joked. “I work hard in my office, and I can tell you that I have never colluded with any party to ‘fix’ an election. I can tell you that any insinuation of that nature is only in his own deluded imagination.”

Burcham was followed by independent candidate Katrina Hunt, of Scottown.

A farmer who works at an insurance and investment firm, she described herself as “a citizen, and not a politician.”

“I’ve always paid close attention to politics in Lawrence County, but I’m not a fan of the two-party system,” she said, adding that, as an independent, she would not be accountable to a party chair.

She said she came from a union family and was raised to work hard and be honest.

“I believe there’s no other way to behave,” she said.

State Rep. Ryan Smith, who was invited but unable to attend, sent a representative to speak for him.

In unopposed races, Sheriff Jeff lawless addressed the forum, while Burcham spoke on behalf of Clerk of Courts Mike Patterson. Recorder Sharon Hager was not present, but sent a letter, which was read by Ed Mollendick of the Concerned Citizens, who served as moderator.

Carlos Ortiz, the owner of Casa Grande restaurant spoke in favor the initiative before voters in Precinct 3, which would allow his business to sell beer and alcohol. The vote affects Casa Grande only. Ortiz said the sales, if allowed, would apply only to customers who order food.

Tim McMaster, the chief of Fayette’s fire department, urged voters in his area to approve a fire levy. He said the last levy was approved in 1993, and the vote would be for a 2 mil levy for all property built in Fayette Township since then. The levy would not raise taxes.

The general election in Lawrence County is set for Nov. 8.

The inaugural meeting took place on Wednesday for a new group aimed at preventing suicide in Lawrence County. Members of... read more