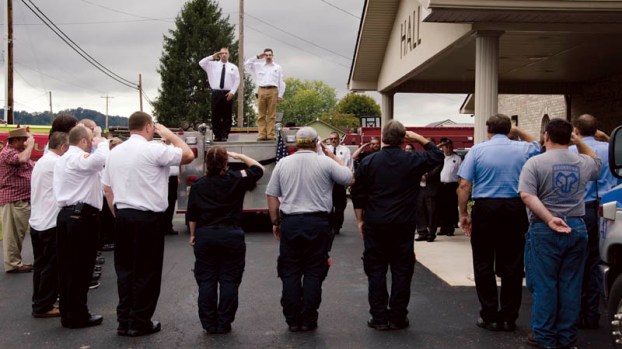 Members of local fire departments salute as the casket of Windsor Township Fire Chief Don Christian is carried out of Hall Funeral Home in Proctorville on Thursday.

A life helping others

PROCTORVILLE — Fire crews and emergency personnel from across the county showed up to pay their respects to the chief of Windsor Township’s fire department on Thursday.

Don Christian, 60, died on Sunday at St. Mary’s Hospital in Huntington, as the result of complications from a longstanding health condition.

The lot of Hall Funeral Home in Proctorville was filled with engines and trucks from a number of departments, including Windsor Township, Aid Township, Coal Grove, Rome Township, Fayette Township, South Point, Decatur, Proctorville and others as personnel dressed in full uniform came for the service.

A native of Huntington and a 1974 Symmes Valley High School graduate, Christian lived in the Windsor Township area for most of his adult life. He joined the fire department, a volunteer force, in 1975 and took the position of chief in 1984. He was retired from Southeast Ohio Emergency Medical Services, where he was an EMT and dispatcher.

Christian led the department through one of the county’s deadliest blazes, the 1995 fire at a Scottown fireworks store, which left nine people dead. The chief rode on the first engine to arrive at the scene as the store became engulfed.

“Each year, at 13:59 hours, that was when the call first came in, I think back to what those families went through,” Christian told The Tribune on the 10-year anniversary of the tragedy, which he said deeply affected him.

Christian took pride in the department and was always looking for ways to get more people to join.

Pastor Billy Markins, who officiated at the service, described Christian as “as servant.”

He said Christian’s dedication to his job was an inspiration.

“These days, people are mostly about themselves,” he said. “His life was about helping others. And what a wonderful life it was.”

Markins, who had known Christian for years, spoke of the faith of the chief, who attended Perkins Ridge Church for 18 years.

“I don’t think there was ever a time I went out there that I don’t think he shared the grace that God shared with him,” he said.

Christian’s daughter, Martha, said her father loved his work and described his personality.

“He was a very, very funny man, and a very smart man,” she said.

Following the service, Christian’s casket was loaded onto a Windsor Township fire truck, which served as the hearse in the procession to Perkins Ridge Cemetery in Willow Wood.

Along the route, on State Street in Proctorville, a truck from Ohio River Road Fire Department in Lesage, West Virginia, and the Ceredo Fire Department were set up on each side of the road. The crews had made the trip from across the river to drape a flag over the highway for Christian’s procession.  One of the crew said he got his start working with the chief.

The city of Ironton will conduct hydrant flushing operations during the week of Oct. 3-8. The purpose of the flushing... read more