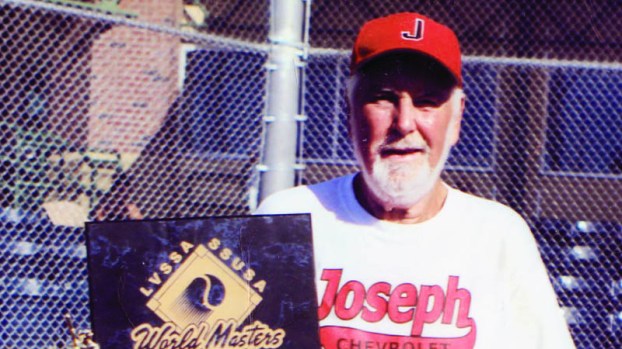 At the top of his game

The average life expectancy for males in the United States is 76 years.

Ironton’s Herm Zornes doesn’t care about averages, unless he’s talking about ballgame statistics.
Zornes, a baseball fanatic since 1941, was recently selected for induction in the National Senior Softball Hall of Fame. The Hall, formed in 1995 and located in Mustang, Oklahoma, is home to only a few hundred members. Being recognized by this organization as a top performer is a tremendous honor among the thousands of men nationwide who compete yearly in various 50-and-over softball leagues.

Much like Major League Baseball’s Hall of Fame in Cooperstown, New York, criteria for enshrinement in this hall is based on outstanding individual achievement and career longevity.
At 82 years old, Zornes, who still plays today, has the longevity part down pat. He won his first game as a pitcher at 61 years of age. Think about that for a moment. How many 61-year-old rookies do you know?

Twenty-one years later, after averaging 30 wins per year, batting a career .650, and racking up multiple MVP awards, as well as a plethora of state and national championships and three world championships, a man who credits “good genes” for his success has reached the apex of his sport.

“It’s a pinnacle you shoot for,” he said of the honor. “I’ve always believed in giving all I’ve got.”
In the mid-90s, following his retirement from Ironton Semet-Solvay and the Lawrence County Board of Developmental Disabilities, Herm and his wife of nearly 63 years, Patricia, began escaping Ohio’s harsh winters for the warmth of Venice, Florida. In Venice, Herm found others in his age group who loved to compete.

For the next two decades, he gave all he had, playing a few hundred games each season in multiple leagues and All Star tournaments while earning the respect of his peers through his competitiveness and strategies for winning.

“My defense is probably what got me in the hall of fame,” he said.

Wait a second. You’ve hit .650 for two decades, which means you get a hit nearly two out of every three at-bats. You’ve won more than 600 games as a pitcher, an average of 30 wins per year. And your defense is the part of your game that stands out? Herm laughed, noting he is a slap hitter looking for open holes in the opposing team’s defense. Others, especially “young” players (those in their fifties) seem to get hits every time they step to the plate.

Speaking of hitting, Herm told me a story three years ago about being replaced at first base most times after he got a hit – by younger, 70-year-old pinch runners. I laughed out loud.

In 2005, Herm’s outstanding success on softball fields earned him induction into the Greater Southern Ohio Tri-State Baseball/Softball Sports Hall of Fame, a hall he shares with his brother, Ray Zornes, Ironton native Dave Swartzwelder, and Portsmouth native/MLB great Al Oliver, among others.

Herm and Patricia continue to juggle their time between Ohio and Florida. While in Ironton, Herm plays ball in a league in Chesapeake to keep himself in game shape.

Eventually, Father Time will wag a finger at Herm and order him to step away from the game he loves. Herm probably won’t listen. Either way, his accomplishments are now recorded for posterity. He is officially recognized as one of the greatest senior softball players to ever wear cleats.

To learn more about the National Senior Softball Hall of Fame, visit www.sshof.org.

When Ginger Gillenwater was 5 years old, those observing her stellar twirling routine would never have guessed the secrets the... read more