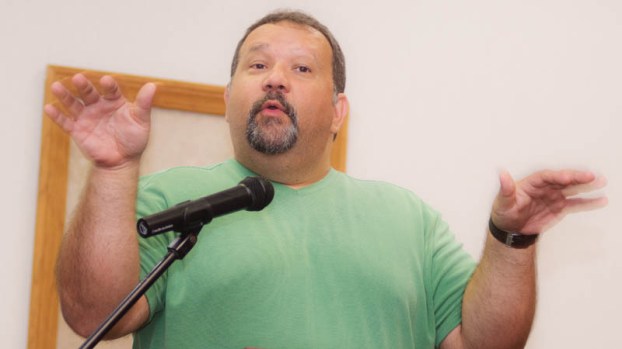 Ironton native Mickey Fisher addresses eventgoers at The Ohio River Festival of Books event in Huntington on Saturday. Fisher told of his success and failures and how he ended up where he is now.

HUNTINGTON, W.Va. — Television writer, producer and native of Ironton Mickey Fisher was back in the Tri-State Saturday as one of the speakers for the Ohio River Festival of Books at the Pullman Plaza Hotel.
Fisher,  the creator of former CBS television series, Extant, is currently writing for FX series The Strain and has recently worked on a six-part series about Mars for National Geographic.
On Saturday, Fisher spoke about his experiences getting started in the business and what it’s like to write and produce television.
Fisher said he started by writing about his hometown of Ironton and things that he knew before moving to New York to write movies and plays, while also auditioning for acting roles a few times a year. From New York, Fisher moved to Los Angeles, where he said he learned to write for television.
Fisher’s first major project, “The King of Iron Town,” was shot in Ironton.
“I started writing TV shows by studying episodes of shows I liked,” Fisher said, citing Friday Night Lights, Breaking Bad and Doctor Who as some of the shows he watched and studied to learn the television show format. “I started writing Extant, but put it on the shelf for about a year before I entered it in a pilot contest.”
Fisher received a call a few weeks after entering Extant into the contest and was informed that he was a finalist, although he didn’t win. From the contest, Fisher met producer and director Steven Spielberg, and his show was put straight to series.
Fisher said he enjoys speaking to people about his experiences and how he got started in hopes that he can inspire them.
“It shows people that if I can do it, anyone can do it,” he said. “If you want to do something, you can make it happen.”