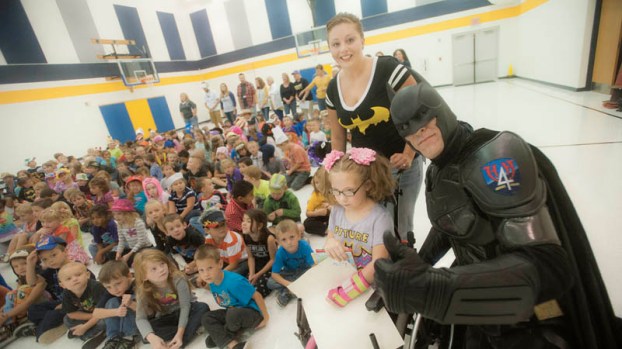 SOUTH POINT — The Caped Crusader was on a mission in South Point on Friday.

First through third grade students at South Point Elementary were gathered in the gymnasium for an anti-bullying assembly led by Principal Chris Mathes when administrative assistant Bill Christian entered the room.

“There’s someone here to see you,” Christian told the principal.

“Can it wait?” Mathes replied. “Is it important enough to interrupt our anti-bullying meeting?”

Christian replied that is was, and Mathes asked him to show the visitor in, unveiling the surprise to students, which had been planned two weeks ago.

Batman, from Heroes 4 Higher, strode into the room to cheers from the children.

The hero came to see one student in particular.

He was there to meet Mackenzie Spaulding, 6, a first grader at the school who suffers from cerebral palsy.

Friday was Mackenzie’s last day at the school for a while, as she is due to undergo hip surgery, which will have her in a body cast for 10 weeks, followed by another month of recuperation until she can return, her parents, Ashley Shaw and Jacob Allen, said.

Shaw, clad in a Batman T-shirt, said Mathes had arranged the visit, which, up to that point, was kept a secret to most students and faculty.

Batman, who presented gifts to Spaulding, was there to offer a message on support.

“Every time we go through something tough, we have a chance to become even greater inside,” he said. “She is going to have strength inside of her that the rest of you can be inspired by.”

He told the kids that they can “turn pain into power.”

“You will be stronger than ever before,” he told Mackenzie. “After you go through this, you’re going to have a special job.”

He told her that she will be able to share her story with other children who will have to go into the hospital and have similar experiences.

“That’s going to be your special super power,” he said.

After his presentation, he posed for photos with children and faculty and gave Mackenzie a “Bat Wheelchair Ride,” taking her for a triumphant lap around the assembly.

Batman, the alter ego of John Buckland, of Huntington, is a former firefighter and says he now works full time as the superhero, doing 30-40 events a month.

He said in the past two and a half years, he has visited more than 300 schools. He began portraying the character four years ago and works with a team of other superheroes. He said his efforts have taken him as far as California.

“My mission is to tell them if we can change the way we view tough situations, then we can empower them to overcome,” he said.

Shaw said her daughter was thrilled with the visit, though, because of her shyness with the crowd, her full enthusiasm would likely be shown later in the day.

“I know, as soon as we get home, she’ll explode with excitement,” she said. “Batman is her favorite.”