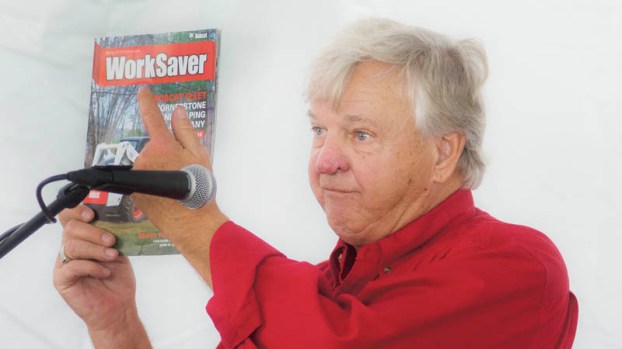 Carl Grover, with Engines Inc., shows off his past work experience with a magazine from WorkSaver.

SOUTH POINT — Those working in the manufacturing industry were celebrated on Thursday at the Lawrence County Chamber of Commerce.

The inaugural Manufacturing Day event, tied in with a national celebration, was sponsored by the chamber and the Lawrence County Economic Development Corporation.

Shirley Dyer, director for the chamber, said workers from Lawrence County and other areas were invited to the lunch, which drew nearly 400 people. “This community has always recognized manufacturing, both locally and nationally,” she told the crowd.

“Manufacturing jobs are a vital part of Lawrence County and we’re here to say thanks to everyone in the workforce and those who made it happen,” Boggs said.

In addition to the lunch, door prizes were awarded to attendees, and booths were set from groups, such as the Tri-State STEM+M Academy, a new public school set to open next year at The Point industrial park.

The keynote speaker was Carl Grover, the owner and CEO of Engines, Inc, a manufacturing and fabrication company based at The Point.
Grover, who said he waited 10 years to open a facility at The Point, told of his life story, from growing up in a coal mining family paid in scrip, to working at repairing Maytag gas powered washing machines.

He said everything his company does is to make a profit.

Grover told the crowd that “the future belongs to guys who work with their hands,” something he said he’s told people for years, and recounted encountering a former worker this week who said he gave him the advice decades ago.

“You’re my hero,” he said the man, who began his career under Grover, told him.

Manufacturing Day is part of a coordinated national effort in which manufacturers open their doors to the public to foster interest in careers.

Chesapeake to celebrate Octoberfest on Saturday