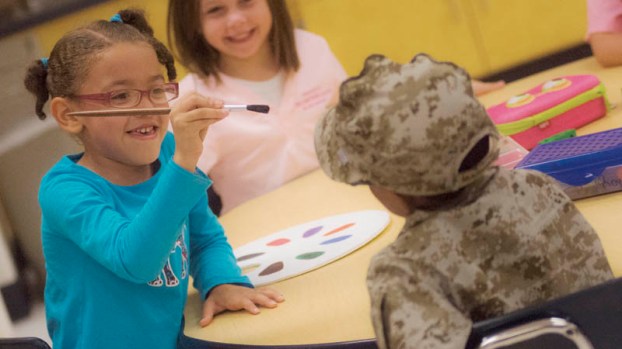 BURLINGTON — Kindergarten students at Burlington Elementary may be just starting their education, but they’re already being presented with many possibilities that await them in 12 years.

Several guests spoke to the school’s three classes of kindergarteners for Career Day on Friday.

In preparation for the event, the students dressed up as their wanted career, Stacie Rutherford, one of the teachers, said – leading to a room full of doctors, veterinarians, cops, cowboys, ballerinas, roller derby girls, rock stars, hairdressers, soldiers and others.

“We read stories about different careers to jump start their thinking and give them several options,” she said.

The first speaker was Tabbi Evans, a vet technician at the Proctorville Animal Clinic.

“When you take your animal to the vet, I’m the one who sees them before the doctor,” she said.

Evans had the children raise their hands if they owned a dog, cat, rabbit and other pets. And many wanted to tell her about their animals during the question and answer to follow.

A few responded that they had snakes.

“That’s the one thing I’m really scared of,” Evans said.

Next they heard from Denise Miller, who works as a banker for Wesbanco.

“We have a big safe at our bank,” she said, telling the children about her duties, which include loans for homes and cars and keeping track of people’s money.

“We have to be able to keep a secret,” Miller said. “Nobody wants people to know what’s in their account. If you can keep a secret, you can be a banker.”

Next was Dr. Jay Farley, a dentist and husband of one of Burlington’s teachers.

“My job is to make sure you brush your teeth,” he said, before giving a demonstration on proper brushing using a prop set of teeth.
“I do that all the time,” one of the students exclaimed when he was finished.

In addition, Farley told the students he’s in touch with someone important.

“I communicate regularly with the Tooth Fairy,” he informed them.

“I’ve worked in surgery since way before Sheila was born,” she said.

Finch brought in several surgery tools, such as an S retractor, suction bulbs and scissors, which she passed around to the students.

“I have one of these,” a girl, dressed a doctor said, eager to show Finch the stethoscope she borrowed from her mother, who is a nurse.

Outside of the classroom, pictures were taken of each of the students in costume, along with drawings of their job goals. Rutherford said the class hosts Career Day every year and that this is the third year for the event.