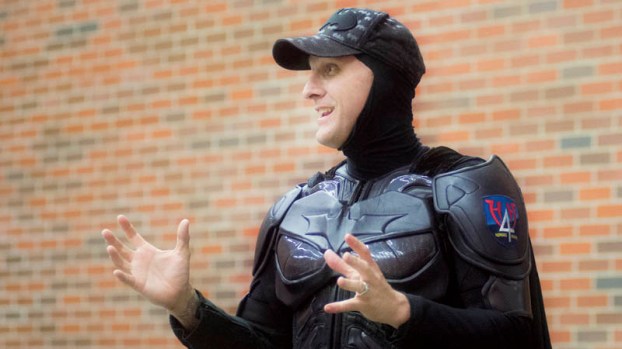 The event, “Be Someone’s Hero,” was organized by The Lawrence County Domestic Violence Task Force and OUS and took place in the school’s Bowman Auditorium. It was the eighth annual observance of its kind at the school.

Ironton Mayor Katrina Keith, who said she is a survivor of domestic violence, read a proclamation in observance of the day.

Keith said that her faith, as well as enrolling in OUS, helped her to overcome the problem.

“Once we become empowered, things begin to change,” she said. “You’re not alone.If Katrina Keith overcome it, anyone can,” she said.

The keynote speaker for the event was John Buckland, the founder of Heroes 4 Higher, who has become well known in the region for portraying Batman and speaking at schools and other events on issues such as bullying.

Most recently, Buckland made national headlines when he visited a school in South Carolina in the aftermath of a shooting and his moving words aired on nearly every national news outlet.

Buckland, who was introduced by his pastor, Chuck Lawrence of Christ Temple Church in Huntington, arrived in full costume, but unmasked soon after, as he began to tell his story.

“See, I’m just a dude underneath here,” he said.

As he does in his visits to schools, Buckland spoke of “turning pain into power” as he related his journey in overcoming the hardships of his youth, which included bullying, physical abuse from his father and sex abuse from a scoutmaster.

He said that those experiences had led him to be on both sides of the issue of domestic violence.

“There’s a difference between an excuse and a reason,” he said. “I’m not going to give excuses for what I did, but I let my pain cause me to become a monster myself.”

Buckland said that that because he never addressed the feelings he was harboring, a pattern began, with him dropping out of high school.

He ended up committing domestic battery in two relationships and, after losing his job and family and making multiple suicide attempts, committed armed robbery for which he was sentenced to prison in 1991 and served seven years.

While in prison, he said another inmate came to him and said to him “God wanted me to ask you why you’re so angry,” a question he said began to haunt him.

“I realized that I had held onto the pain and anger and let the rage take itself out on the world,” he said.

Buckland said, soon after, he found his faith in Christ, and began to turn things around, eventually reaching a place where he could forgive his abusers. He finished his education in prison and began to work with outreach groups for inmates. He was paroled in 1998.

Upon his release, Buckland said he wanted to pursue his dream to serve as a firefighter, though his two felony convictions made that an obstacle.

It took time, but, after working in the restaurant industry for some time and being active in his church, he was admitted to the fire academy and began work as a firefighter in the Atlanta area.

Because of his turnaround, his received pardons for his crimes in 2002.

“They don’t just give those away,” he said.

In 2008, the same district attorney who had prosecuted him in the early 90s expunged them from his record.

While the story is now no longer on the record, Buckland said it is still important for him to be open and share it.

“Transparency is what really heals people,” he said.

Buckland’s reform was so strong that in 2009, he was given a security clearance by the U.S. Department of Defense to go to Iraq to serve as a firefighter in the theater of operations.

When he returned, he moved to West Virginia, where his wife and her family lived. He said that, due to civil service laws, although highly decorated, he was unable to get a job in firefighting after the age of 35 in West Virginia.

It was shortly after, that the idea to portray Batman and share his story came to him.

“God told me to be Batman,” he said he told his wife, when the inspiration came at 2:30 in the morning. He said she was skeptical and greeted the announcement by telling him he could do whatever God told him and quickly going back to sleep, while he stayed up searching for costumes to begin his mission.

Now a full time Batman, he does 30-40 events a month and has visited more than 300 schools, speaking to students on a range of issues.

He has also worked with children battling illnesses, telling them that their suffering will make them a stronger person when they can share their story with others in their situation.

Of his own experience, Buckland said it shows that there is help and hope for perpetrators of domestic violence, too.

“If perpetrators can turn around, then it’s a powerful story,” he said.

Tuesday night’s program was dedicated to the memory of Angela Bacon Shoops, who worked at the Lawrence County Domestic violence Shelter and, prior to the start of speakers, a balloon release took place in her honor.

“We miss her,” Payne said. “Angela was not just our colleague. She was our friend.”

Tribute Construction Co. will be in the process of milling up the current asphalt on South Fifth Street between Mastin and... read more