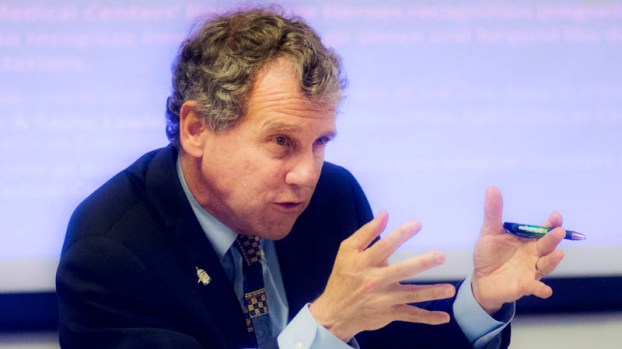 On Wednesday, U.S. Sen. Sherrod Brown, D-Ohio, made a stop in Ironton for a roundtable discussion with city and county leaders on issues affecting the region.

The event, held at Head Start’s administrative offices, included leaders of the Ironton-Lawrence CAO, officials such as Ironton Mayor Katrina Keith and county leaders such as Elaine Payne of the Lawrence County Domestic Violence Task Force, and followed a similar meeting with Scioto County officials in New Boston earlier in the day.

The forum was short on rhetoric from Brown, who said he was there to get information about the leaders and their work.

“I just want you to tell me what we should be doing together,” Brown said. “I’m going to be taking notes and not doing much talking.”

Brown began by asking Sharon Daniels, of Head Start, where her work stood.

“Things are going great with Head Start in this area,” she said.

Regarding children, Brown was particularly interested in finding out more about the status of the summer feeding program for children in the area, which provides meals while school is out. It is a program Brown has championed through legislation in the Senate.

“Do the sites have education and enrichment in addition to the feeding sites?” he asked.

He was told that the sites have individuals who go out into the community to work with youth. They discussed the ability to open more sites and the requirements involved, as well as the idea of making it possible to deliver the meals to families who can not make it to the sites.

When discussing the need for social aid programs in the region, Keith shared her own story.

“I as a resident, have gone through a number of these departments,” she said, detailing the struggles of her youth.

She said the opiate epidemic was a major issue in the region and hailed the work of the county prosecutor, the drug diversion program and the STAR Community justice Center in Hanging Rock.

“It’s a huge issue and I commend the people tackling it,” she said.

On the issue of jobs, she said the city was trying to reinvent itself.

“We used to be about manufacturing,” she said. “Yes, we still need those jobs, but we’re trying to bring others.”
She said she would like to increase tourism to area and cited the Wayne National Forest and the riverfront as a draw.

The issue of prescription drug prices for seniors was raised by multiple members of the panel.

Brown said that he is set to announce a bill with Sen. John McCain, R-Arizona, which would bring in more competition for drug companies, especially in the area of biologics.

He cited the success the Veterans Administration has had in keeping prices down.

“The VA negotiates for 7 million veterans directly with the drug companies, and they pay half the price of everybody else,” he said.

Brown also pointed out that the Affordable Care Act is working to close the “donut hole” payment gap in the Medicare Part D prescription drug program.

Brown asked Payne, who has worked on the issue of domestic violence in the county for more than 30 years,  about what she has seen during her tenure at the task force.

“Tell me how it has changed,” he said. “Is it more fueled by alcohol? Or are opiates a factor now?”

“I think a lot of it is unemployment,” Payne said. “If you can’t support your family, it can lead to drugs and domestic violence.”

Brown wanted to know what more could be done to keep victims from returning to their abusers.

Keith, a survivor of domestic violence, spoke of her experience.

“Let me attest — I am a victim,” she said. “I found myself in a situation with no confidence or self esteem. Mentally, I had no resources.”

Keith said enrolling at Ohio University Southern and the education she received there helped her get to a better place, to enter the workforce and be able to sustain herself independently.

The panel touched on a number of issues, from child health care to the long-unfinished Chesapeake Bypass, for which Brown pledged to help officials get movement on.

Brown said he hosts 30 such roundtable meetings a year. Following its conclusion, he said he found it very productive and was most impressed with how leaders of both Republican and Democratic leanings came together on the issues.

“You see here the enthusiasm of people of parties to take care of things,” he said.