Neal getting in his kicks for St. Joseph & Ironton 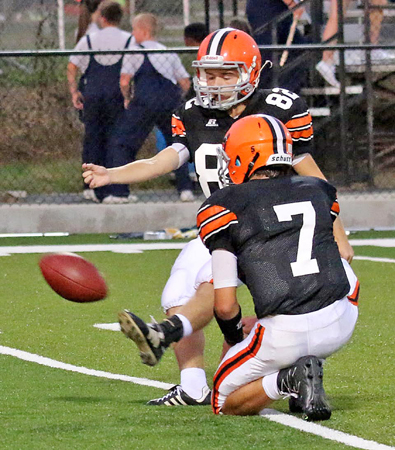 Tre Neal gets a big kick out of sports, and he gets those kicks in two sports at the same time.
The 5-foot-9, 140-pound Neal is a senior soccer player for the St. Joseph Flyers. He was the team’s leading scorer this past season.
Neal is also kicking and scoring in football. And while other players such as Drew Smith at South Point and Dalton Nida at Chesapeake both play soccer and kick for the football team, Neal is doing it for two different schools. He played soccer for St. Joseph but is the placekicker for the Ironton Fighting Tigers.
Thanks to a state legislature bill that allows students at private schools to play a sport not offered by their school at the public school in their home residence, Neal is able to play for Ironton while attending St. Joseph.
Ironton quarterback Jake Isaac attended St. Lawrence Elementary with Neal and the two have remained friends. It was Isaac who planted the seed in Neal’s head about kicking for the Fighting Tigers.
“Well, last year Jake Isaac started texting me and saying, ‘we need a kicker.’ I’ve never kicked a football before but he talked me into coming. So I came out and tried it and ended up loving it,” said Neal who handled Ironton’s placekicking last year as well.
Neal is 24-of-26 on extra points this season and 2-of-3 on field goals. His only missed field goal was a 39-yarder that had plenty of distance but just missed to the right. His only missed conversions were after the first two touchdowns this season.
Neal noted that there is an adjustment to make between kicking a football and a soccer ball.
“It’s the follow through. When you’re kicking a soccer ball you’re taught to fall over on the side of your foot. In football you only go straight for the ball to go straight. Otherwise, you pull it and you end up missing everything,” said Neal.
Having to practice two sports at the same time was a little difficult, but Neal said Ironton football coach Mark Vass and St. Joseph soccer coach Mike Balestra were very accommodating.
“It’s tough, especially to keep up the grades. That’s the bad part,” said Neal. “But both coaches worked with me. I only had to go to one football practice and that was Wednesday when they worked on special teams and I could still play my soccer games on Tuesday and Thursday and (football) game kick on Fridays.”
Neal admitted that being around football did get him thinking about playing the sport full-time for a brief period prior to this season.
“I’ve thought about coming out, maybe this year. But I love kicking and I still wanted to play soccer,” said Neal.
With Neal being a senior, Ironton appeared to have a void in its future kicking game. But Neal got Flyers’ freshman Ike Unger to tryout a few weeks ago and Unger made his debut with the second team in last Friday’s game against Gallipolis.
After the final touchdown of the night, Unger drilled his extra point attempt to set the final 49-0 score.
It looks like Ironton has another Flying Tiger.