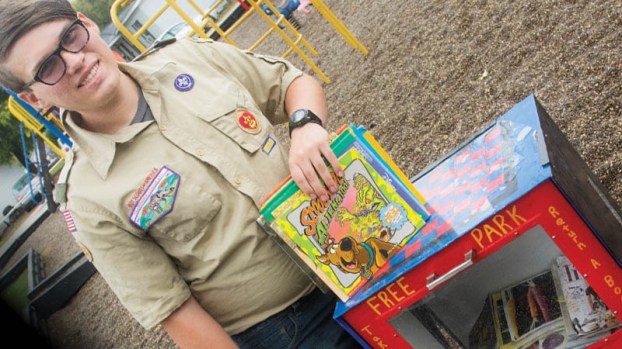 The playground at Burlington Commons has a new addition.

A free library was recently installed as part of an Eagle Scot project.

Christopher Roy, an eleventh grader at South Point High, completed the project with help from other scouts in his troops on Sept. 18.

Roy started looking for a project to do in July, his mother, Donna Roy, said.

He looked at other projects done by scouts in the past as well, to get ideas for the requirement.

“They involve some kind of service to the community,” she said.

After searching, Christopher settled on the idea of a library.

“I just wanted to help kids have a place to get books, he said. “I saw them in other parks.”

He took an out of service newspaper vending machine, repainted it and installed a second door, creating two spaces for books, which he stocks regularly.

“I’d seen them made in wood and they all leaked,” he said.

In addition to children’s books, he painted a checkerboard on top of the library, which was installed in a corner of the playground at the commons.

Christopher said he’s interested in being a mechanical engineer after graduation, and he hopes to continue working with the scouts in some form.

“I’ll probably find some way to help,” he said.