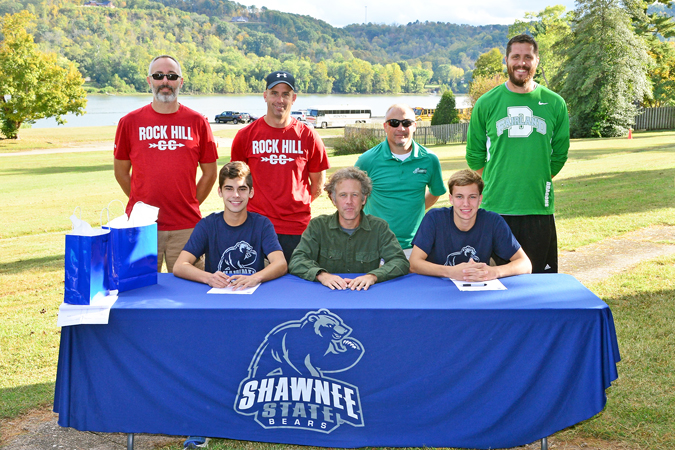 PEDRO — A good program, a good coach and a good friend were all that was needed to convince Brendon McCormick where he wanted to run cross country in college.
The Rock Hill Redmen senior runner left little doubt that joining the Bears program and former high school teammate Seth Miller were the deciding factors.
The Shawnee State men’s program is currently ranked No. 10 in the latest NAIA poll under 12-year veteran head coach Eric Putnam, a 10-time Mid-South Conference Coach of the Year and three-time Ohio NAIA/Division II Coach of the Year.
“They have a great program and I love their coach. He’s awesome. Plus, I miss running with Seth. And I want to go to a winning team at the next level,” said McCormick.
“I just kind of knew Shawnee was for me when I first met coach Putnam. It was pretty cool.”
Joining a strong program will make it tough for a freshman to rise to the top of the meet list and McCormick understands the situation.
“I’m hoping to get on the varsity team. I just want to contribute. That’s all I really want to do,” said McCormick.
But getting to the top of the list quickly has been a tradmark for McCormick who didn’t begin running cross country until his freshman year of high school while still a member of the football team.
“I was playing football but I really started running (seriously) my sophomore year. There is a more family atmosphere in cross country and it just fit me better because I was always small so running was kind of better,” said McCormick.
Rock Hill coach Mark McFann has no doubt McCormick will find success at the next level.
“He’ll do well at Shawnee. He’s a hard worker. He’ll do anything the coaches ask him to do. He’s a good leader. He’s really stepped up this year doing a good job leading the younger guys on the team. He’s going to be a big help to Shawnee,” said McFann.
McCormick was second at the Ohio Valley Conference meet. He was edged out by Fairland’s Bryce Day who is also headed to Shawnee State.
Day ran a 16:37.52 while McCormick was less than a second behind at 16:38.81.
McCormick was second again at the Division III district meet as he ran a 16:40 and was edged by Evan Leist of Beaver Eastern who ran a 16:38.93 time.
Last year, Rock Hill won the district meet and McCormick was third overall with a 16:323.9 time. He finished behind winner and teammate Seth Miller — now at Shawnee State — and Dan Seas of Peebles.
At the regional meet, McCormick was fifth overall with a 16:29.3 time to qualify for the state meet. Rock Hill was fifth as a team.
McCormick then ran a 16:34.2 at the Division III state meet and was 32nd overall among 155 runners.