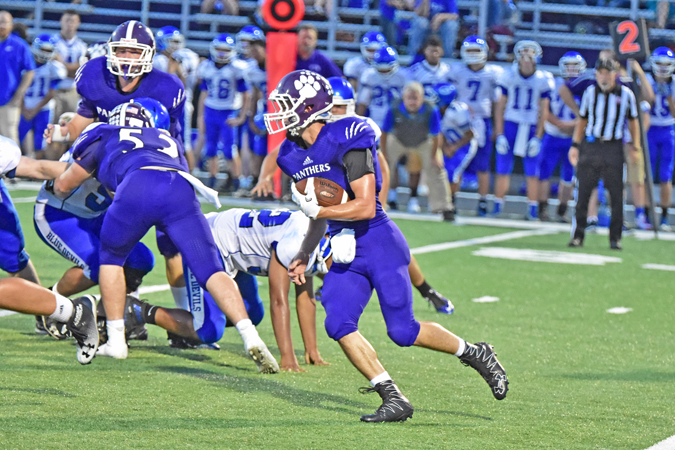 Chesapeake Panthers’ senior quarterback runs behind the block of Brendan Meadows (52) during a game against Gallipolis. The Panthers host Barnesville at 7:30 p.m. Friday in the Division VI Region 23 quarterfinals of the OHSAA playoffs. (Kent Sanborn of Southern Ohio Sports Photos)

CHESAPEAKE — Although the Barnesville Shamrocks are an unfamiliar opponent for Chesapeake, there is one thing certain the Panthers all ready know.
Barmesville will run the ball.
The Shamrocks are 8-1 this season on the strength of their running game led by 6-foot, 205-pound senior tailback Caide Bunfill and it will be the chief focus of the Panthers when the teams meet at 7:30 p.m. on Friday in the Division VI Region 23 quarterfinals.
“They run a bunch of formations. They give you a wide-open look but they want to run the ball. They can throw if they need to, but they want to run the ball,” said Panthers’ coach Andy Clark.
Bunfill has 160 carries for 1,628 yards and 25 touchdowns. But he’s not a one-man show.
Senior fullback Butch Holskey (5-10, 195) complements Bunfill with 447 yards rushing on 46 attempts and seven touchdowns. He’s also caught 12 passes for 139 yards and a score.
Senior quarterback Matt Burkhart (6-3, 195) plays off the running game. He is 57-of-102 passing for 852 yards, seven touchdowns and just two interceptions. He has also rushed 78 times for 490 yards and eight scores.
Burkhart threw for 1,363 yards last season.
“The quarterback is a pretty good player who can run pretty well. If he gets out of the pocket, he can hurt you,” said Clark.
“The tailback (Bunfill) has some speed and some size. He’s pretty good. The fullback runs hard. You’re not going to arm tackle their backs.”
The top receiver is senior Kaelan Hannahs (5-9, 170) with 26 receptions for 292 yards and a touchdown.
The offensive line is comprised of Zach Meade (5-9, 220), Brady Treherne (5-7, 205), Jordan Graham (5-8, 185) and Jacob Clift (6-1, 175).
“In terms of size, they remind me of us. They aren’t very big. We don’t see that very often. We might be bigger than them for the first time this year,” said Clark.
“They are small but quick on defense. They’ve got a bend but not break type of defense.”
But Barnesville isn’t the only team that can run in this game.
Chesapeake (9-1) is led by quarterback Casey McComas who has 100 carries for 1,242 yards and 16 touchdowns. He is also 25-of-53 passing for 459 yards and five TDs.
Cecil Fletcher had 58 carries for 753 yards and 11 touchdowns, and Will Scott 77 attempts for 573 yards and 10 scores.
Ty Wilcoxon had eight catches for 152 yards and J.W. Bartrum five grabs for 101 yards. Each has a touchdown.
Barnesville is making its seventh playoff appearance and first since 2006 when they lost 14-8 to Warren John F. Kennedy 14-8 in the Region 17 semifinals.
The Shamrocks are 8-1 with the lone loss came in a 54-50 shootout with Buckeye Trail.
Chesapeake lost at Lucasville Valley 23-0 last year in the first round of the playoffs. Valley reached the regional semifinals.