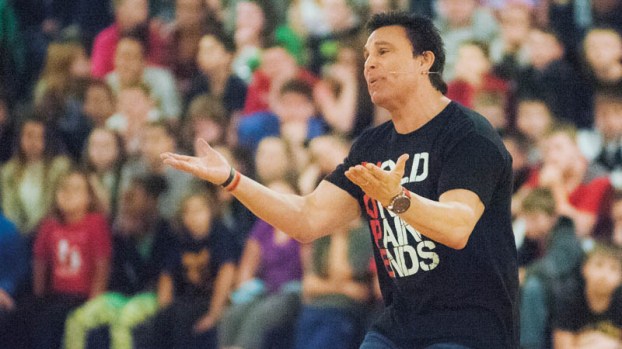 SOUTH POINT— Inspirational speaker and former professional wrestling champion Marc Mero was at South Point High School Friday afternoon, speaking to the high school and middle school about his story and spreading the message of making positive choices.
Mero’s program is titled “Champion of Choices,” and focuses on the importance of setting high goals, the impact of bullying, how making the right choices can affect one’s future and talking about his background growing up, dealing with fame and drug and alcohol abuse.
Mero said that when he was 10 years old, growing up in Buffalo, New York, he set goals for himself, which included becoming a professional athlete, and buying a black Cadillac, a speed boat and a house for his mother.
As an up and coming boxer, Mero had just turned professional before getting injured, having to require surgery, and missing a year of action.
It was at that time that he said he started making the wrong choices and hanging out with the wrong crowd, getting involved with drugs and alcohol abuse on a daily basis. The year out of boxing turned into two, and three, all the way up to 10.
Mero said that after seeing professional wrestling on TV, he decided that he could do that and become a professional wrestler.
He eventually bought his mother a house, built himself a house, bought that Cadillac and speed boat, and said he had everything that he ever wanted, before eventually starting to hang out with the wrong people again, falling back on drugs and alcohol and losing everything.
He also talked about his younger sister dying of cancer, his mother dying later on and two weeks after that, his younger brother dying. He said that he treated them less than what they should have been, and that he wishes he could just go back and do things differently before losing them.
Mero said that he was contemplating suicide just over a decade ago, before a talk with someone ended up saving his life.
“We had a person who graduated several years ago, and wants to remain anonymous, who had a tragedy with drugs and suicide in his family,” South Point High School Principal Ben Coleman said. “When he came back a couple years ago, he found a syringe at a car wash and wanted to do something to change the community. He saw a video of Marc Mero and donated money to get him here for the impact it would have on the students and the community.”
Coleman said the main goal of Mero’s presentation was to see a change in the culture of the South Point community.
Along with his wife, Mero has been telling his story and spreading his message of making good choices to schools and groups all over the country and the world for the past 10 years.
“There’s no greater joy than being able to help people,” Mero said. “Every day, I get hundreds of letters from kids, and adults, who have been so moved by my story. It’s amazing how a one hour presentation can have that great of an impact on people. There’s just no greater joy in the world.”