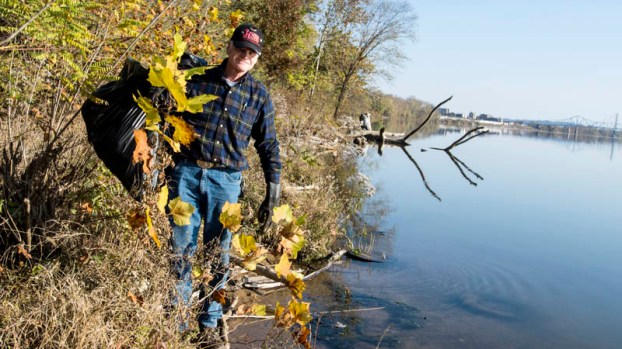 Ironton resident Dan Hieronimus with a bag full of garbage he has collected while walking up and down the Ohio River bank outside his home in North Ironton.

Former Lawrence County Sheriff Dan Hieronimus has a message to those along the Ohio River.
Quit dumping your trash.

Hieronimus has been fighting a never-ending battle to clean up the river bank along his North Second Street neighborhood.

The banks have been littered with bottles, tires, barrels and other items. While giving The Tribune a tour of the bank on Tuesday, he was able to fill a garbage bag in five minutes with discarded items that have washed up.

“I just cleaned up two days ago, and you can see how much is here now,” he said.

He says he has been working to collect the litter whenever he gets a chance.

“It could be coming from way up in West Virginia, or it could be from local boaters,” he said.

He says, in addition to the unsightliness, the trash poses a threat to wildlife, such as geese and ducks, along the river, who can get caught in it or ingest it.

The majority of it comes in the form of plastic bottles, which do not break down.

Some of it is too big for him to remove, he said, pointing to two large barrels, which have washed up and are now filled with sand.

The situation is not unique to his neighborhood. During a walk across the new Ironton-Russell bridge in July, large amounts of garbage, brought downstream from recent rains, could be seen backed up against the piers.

Hieronimus said he hopes he can bring awareness to the problem.

“I want to encourage boaters and people who live along the river to stop dumping trash into the beautiful Ohio River,” he said.

Old Ironton-Russell bridge to close to traffic on Nov. 23

Details of opening ceremony of new bridge revealed The opening of the new Ironton-Russell bridge is a little more than... read more