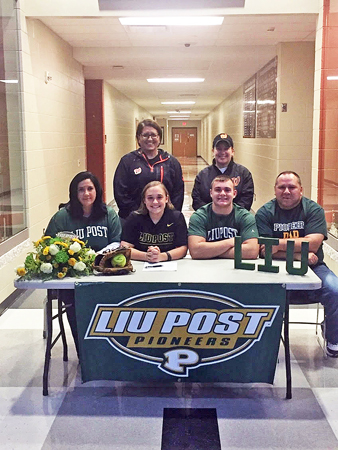 WHEELERSBURG — It’s been a long road to playing college softball for Bre Klaiber, and it’s about to get even longer.
Klaiber said she began thinking about playing college softball back when she was 5-years old. When she signed with Long Island University-Post, the road added an 11-hour trip from home.
“The second I stepped on the field for tee-ball I knew that’s what I wanted to do with my life,” said Klaiber who is a senior at Wheelersburg High School.
“I grew up watching my dad play and I knew this is what I wanted to do.”
Bre’s father, Bill, played at Ironton and holds the school records for most home runs in a single season and for a career. He later played at West Virginia State.
Filled with her father’s love of the game, Bre has pushed herself to be an outstanding player. She was the starting third baseman for the Lady Pirates who won the Division III state title last spring.
Klaiber has also shortstop in the past. She said LIU-Post coach Jamie Apicella plans to use her on the left side of the infield.
“Hopefully, I’ll start the first of the year. They hope to get my bat in the lineup,” said Klaiber.
LIU-Post is an NCAA Division II program and has qualified for the national tournament for 16 of the past seasons including 14 straight under head Apicella.
The Pioneers have advanced to the College World Series on four different occasions.
In 18 seasons, Apicella is 673-265-1 and is the program’s winningest coach. His teams have won eight East Coast Conference titles.
During Klaiber’s sophomore year, LIU-Post held a camp in Pennsylvania and weather forced the showcase indoors. Being in close quarters, Apicella noticed that the ball sounded different coming off Klaiber’s bat than most of the players at the showcase.
Apicella said her hitting had them watching Klaiber more closely and “she seemed very focused and passionate about her trade.”
Klaiber visited and fell in love with the school and the campus. Apicella said the coaches realized she loved the game was an extremely hard worker both on the field and in the classroom.
“Meeting the family we saw a person who came from a good foundation of core values and we realized where that determination came from,” said Apicella.
During workouts at the school, Klaiber impressed the coaches with her skills, strong throwing arm and athleticism.
“Bre is a well-rounded person who has a bright future ahead of her and we are extremely excited for her arrival on campus next fall,” said Apicella.
The combination of Klaiber’s academics and softball talents enabled LIU to offer one of the school’s top academic scholarships into the Honors College.
Klaiber talked with numerous schools and had visits to Indianapolis University and Carson-Newman (TN), but she preferred the opportunity to play further from home instead.
Fortunately, all of LIU’s games are streamed online.
“I wanted to get out of Ohio and see different competition. I didn’t want to go past a five-hour drive. All of a sudden I get a call from a coach at Long Island,” said Klaiber.
“I visited and fell in love with the campus. The coaches and players were great and the college was not too small or too big.”
Bre — who plans to major in health sciences with a minor in business — is the daughter of Bill and Melissa Klaiber of Ironton.