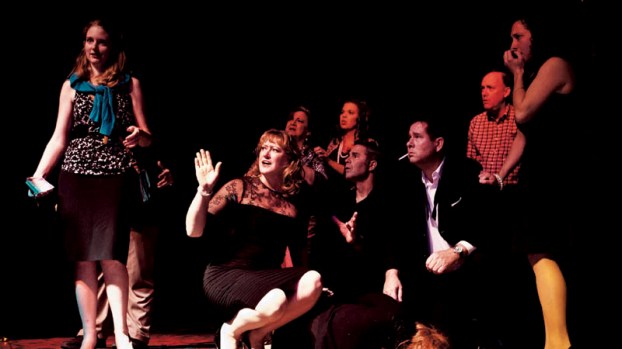 The scene: One of the Monroe sisters has been killed, but who did it? Cast member appear on stage during Murder, Mystery and Mayhem a interactive murder mystery dinner production Saturday at the Ro-Na Theater.

A sold out show at the Ro-Na on Saturday gave attendees a chance to solve a mystery while raising funds for a good cause.

“Music, Murder & Mayhem,” an interactive theatre event took place at the Ro-Na Theater, courtesy of the Murder and Merriment troupe of Huntington.

Funds raised from the event went to benefit Ironton in Bloom and their efforts at city beautification.

“Our goal, when we started eight years ago was to plant pride in Ironton,” Carol Allen, of Ironton in Bloom, said, introducing the event. “Our mission was to develop partnership to help make Ironton a better place.”

Allen then turned the event over to “Hedda Hooper,” a Hollywood gossip columnist, who was a composite of legendary writers Hedda Hopper and Louella Parsons.

Hooper, portrayed by actress Rachel Sanford, set the tone of the evening, which was based around a performance by the Monroe Sisters, singing group, inspired by World War II-era acts like the Andrews Sisters.

Following her introduction, the attendees were invited to get in line for dinner.

While they waited, they met the characters of the show, such as the hard-drinking former star “Clark Crawford,” portrayed by George R. Snider III, who mingled in the crowd, interacted with them and improvised character moments, giving the audience a chance to view their motivations.

Local TV personality and reporter Kennie Bass, who portrayed “Ted Sullivan,” was one of them.

When an attendee recognized him from his decades on WCHS news, Bass did not break character.

Once the food was served and the crowd was seated, the Monroe Sisters took the stage for two songs. Then, during the third song, the stage went dark and gunshots rang out. When the lights returned, one of the group was dead.

Then, after some onstage drama, the audience was asked to question the characters and to try to solve the mystery.

Then, after the crime was solved, the audience had a chance to win door prizes.

The identity of the killer changes from show to show, as does the character who ends up as the victim, Snider told the audience after the show. He said the group, which played to one of their biggest audiences at the Ro-Na, have 37 different mysteries in their repertoire.

Juanita Dalton, of Ironton in Bloom, said the event serves as the “blowout fundraiser” of the year for the organization.

The event was a success, and the seats, priced at $60 each, went fast, she said.

WILLOW WOOD — Hundreds turned out Saturday morning to get a head start on the Christmas season, when the annual... read more