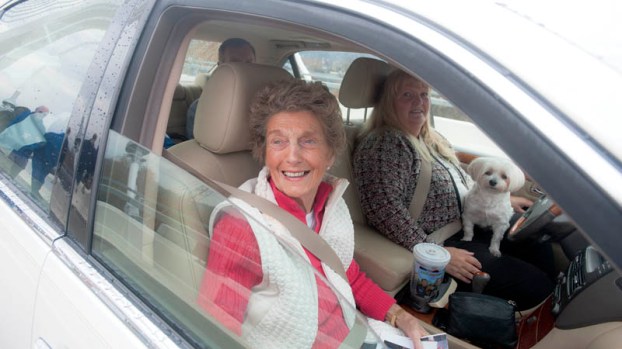 Russell, Ky., resident Carol McKenzie is the first official citizen to ride over the new bridge.

Raffle winner happy to be part of history

Longtime Russell resident Carol McKenzie, winner of the city of Ironton and Ironton aLive sponsored raffle to be the first car to cross the new Oakley C. Collins Memorial Bridge before being opened to traffic, said she was thrilled to be a part of the opening ceremony.

“We were so excited,” she said. “My brother was there, which was nice because he’s usually in Florida but was home for Thanksgiving, and also my daughter and her husband. We were tickled to death.”

As the winner of the raffle, following the parade, which went across the new bridge and wrapped around the old bridge, McKenzie’s vehicle was the first car to cross the new span before it was opened to traffic Wednesday afternoon.

“It was a great ceremony and it was great to see so many people,” she said. “What a nice feature the new bridge is.”

Along with McKenzie, who was in the passenger’s seat, her daughter Nancy Dennis, who drove the car, Nancy’s husband Mike Dennis, who is also the pastor of Greenup Christian Church, her brother Jim Williams and a family dog made the first ride across the bridge.

“Everyone I’ve told was so thrilled,” McKenzie said. “I couldn’t believe it.”

Today Americans celebrate the Thanksgiving holiday, which traces its roots back to the harvest 1621 celebration at Plymouth, and descendants... read more