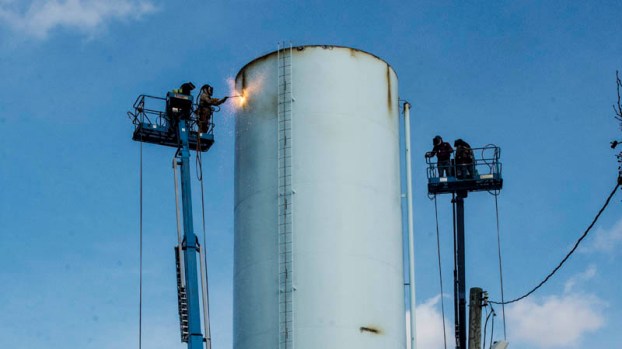 Land will go to Burlington Commons

BURLINGTON — A crew of seven men worked Thursday to tear down a familiar, though out-of-use, landmark in the Burlington area.

Two cranes hoisted workers from Icler Demolition, of Romeo, Michigan, to the top of the community’s water tower, where they used liquid oxygen and gas torches to cut it down piece by piece.

As the sheets of metal from the tower were lowered to ground, they rolled up and workers on the ground cut them down to smaller size.

The 200,000-gallon, 80-foot tower, located next to Burlington Commons, was built in the late 1950s by the Coleman Trainer company of Charleston, West Virginia and used by Aqua America until three years ago. Ed Mollendick, the president of Concerned Citizens of Burlington, said the tower was a familiar sight to many and was often used by residents in giving directions to visitors.

He said the water company had an agreement with the Lawrence County Commission that, once the water tank was out of service, it would be torn down.

“The original contract said the land would go back to the commission,” he said.

This was done, following an asbestos study by the company, he said.

Mollendick, who lives next to the Commons, which his group maintains, said the land would be added to the park, after the fence is torn town, asphalt is removed and the ground graded and seeded.

He said members of the group were proposing ideas such as tennis courts or to use the space for adult exercise equipment.

Crews were set to wrap up the removal of the tank by Thursday evening.