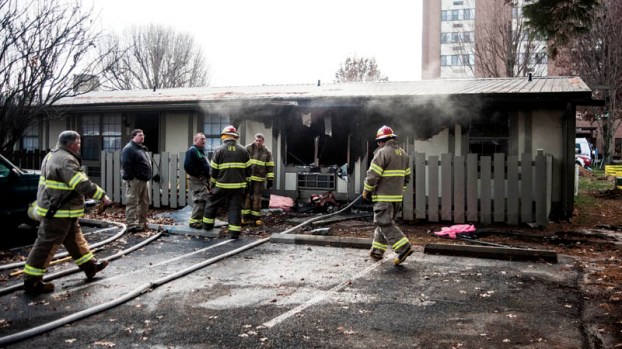 Members of the Ironton Fire Department were on scene of a structure fire early Wednesday morning at Susan Court Apartments.

An Ironton couple were left without a home, following a fire at an apartment building on Wednesday morning.
Fire chief Mike Mahlmeister said the department received a call at 8:07 a.m., reporting the blaze at 316 Susan Court.

“On our arrival, the apartment was well engulfed and flames were coming out the front windows,” he said.

The building, owned by Michael Emnett, of Wheelersburg, housed eight apartments, Mahlmeister said, though only one was destroyed, a unit where James and Virginia Haskins resided. The fire is believed to have started in the living room of that apartment.

All residents of the building were evacuated and no injuries were reported in the fire, though Mahlmeister said one elderly woman, who was bedridden, had to be taken to a hospital where her needs could be met until she was able to return home.

The residents of the other apartments will be able to return shortly, Mahlmeister said.

The American Red Cross is assisting the Haskins while they are displaced.

OR, cash/surety bonds set Three co-defendants all pleaded not guilty to multiple drug and other charges in Lawrence County Common... read more