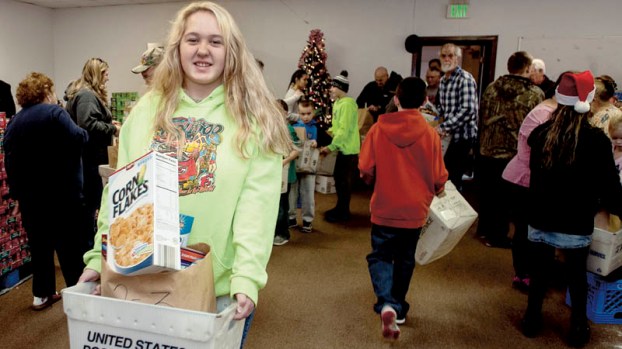 April Conley heads to the back of the City Welfare Mission, where bags and bags of food supplies are being lined up for the yearly Christmas giveaway.

The charity event, which has taken place for more than 60 years, drew dozens of volunteers on Friday to prepare the boxes for recipients.

Jeff Cremeans, the pastor and director for the mission, said the volunteers prepared 520 of the packages.

Dozens helped to fill the boxes, which were rolled down a makeshift assembly line as the contents were added.

“They get canned vegetables, milk, cereal, mac and cheese and stuffing,” Cremeans said, listing some of the items included.

He said some of the food is donated, but most is purchased in bulk, thanks to monetary donations to the mission.

Cremeans said most of the volunteers came from his church and Rubyville Community Church and its pastor, Calvin Ray Evans, as well as the community.

One of those from Rubyville was Bob Pelphrey, who said he has taken part in the event for several years.

“We’re just helping to pack them up,” he said.

In addition to the food packages, Cremeans said the Mission also provided toys to children.

Recipients arrived Saturday to pick up items. In order to receive a package, they had to pre-register in advance by providing proof of income and Lawrence County residency.

IPD helps students through Shop with a Cop