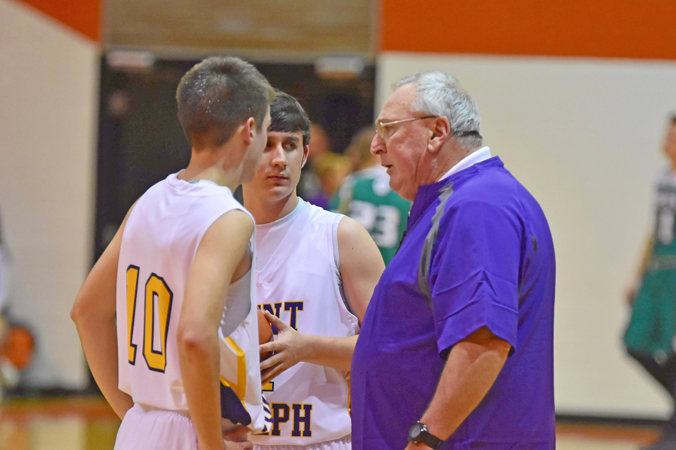 Long-time high school coach Rex Cooksey (right) talks with Tre Neal (10) and Peyton Adkins during a recent game. Cooksey coached in Kentucky for 40 years but came out of retirement this season to take over as the St. Joseph Flyers’ head basketball coach. (Kent Sanborn of Southern Ohio Sports Photos)

Rex Cooksey doesn’t know the meaning of the word “quit.”
It also appears he doesn’t know the meaning of the words retirement, convalesce and relax.
When Cooksey closed his teacher’s grade book and hung up his whistle, he was ready to sit back in his recliner with remote control in hand and all the pizza delivery numbers written on the cover of his phone book.
Cooksey had spent most of his 40-year career coaching at Fairview, Ky., with stints at Ashland, Greenup County and briefly at Coal Grove.
But then the phone rang and it was an old friend and opposing coach Lou Mains — himself a retired teacher and coach who is now the athletic director and baseball coach at his alma mater St. Joseph High School.
Mains was needing a boys basketball coach and Cooksey’s name popped into his head.
“When I announced my retirement, I was perfectly happy with it. I’d had 40 years of basketball and football there at Fairview High School. I’d coached football and girls basketball last year. I said (to his wife) Lisa, honey, 40 is was a good round number,” said Cooksey.
“And then I got a call from coach Mains who I’ve known for a long time and he said they had a situation. My wife said, ‘I don’t think you’re done. I think you should get back into boys’ basketball.’”
It didn’t take Cooksey long to find his way into the St. Joseph gym and slip on a purple coaching shirt, his whistle hanging from his next and his sneakers laced just the way he had done the previous 40 years.
Cooksey was hired in 1978 and was the head baseball — and sometimes track — head coach until 1984. He has spent more time as the head football coach and head basketball coach  — some years with the boys and some with the girls. He was the head football coached for 16 seasons and the defensive coordinator for 14 years.
He coached four years at Greenup County and Ashland and two years as an assistant at Coal Grove. Cooksey said that being at a small school meant coaching more than one sport.
“It’s a small school and that’s just the way it was done,” said Cooksey.
Fairview has an enrollment for approximately 450 students in grades 6-to-12. Having small numbers is nothing new to Cooksey, but it is nothing like St. Joseph with just 35 boys in the high school.
“I’ve always respected St. Joe and what they’ve brought to the table. I’ve always considered myself a small-school coach even though I’ve been at Ashland and Greenup and some bigger schools,” said Cooksey.
“The kids are great. It’s like family. It’s low numbers – we’ve only got 35 boys in the school — and we try to get every single one to come out for basketball and these are the 11 or 12 who decided to stay with it.”
Cooksey said that his approach to coaching at a small school is no different than at a larger program.
“I teach them to be men, teach them life skills, teach them some basketball,” said Cooksey. “I scout hard. I don’t overload them. I’m old school. I love to teach. These kids play hard. They have good manners. They’re well-behaved.
“I felt from day one very comfortable. In terms of attitude and effort it has been super. These are a good bunch of kids. They’ve caught onto things quicker than anywhere I’ve coached.”
Cooksey’s son Derek is the boys’ basketball coach at Fairview. He served as an assistant to his father before taking the head coaching duties in 2009. Derek’s assistant coach is his brother, Brett.
“The Cooksey’s are a coaching family. When you get one, you get them all. My wife will keep a stat sheet,” said Cooksey.

The Associated Press Clemson coach Dabo Swinney knows quite well how teams and players get long-term benefits from the extra... read more