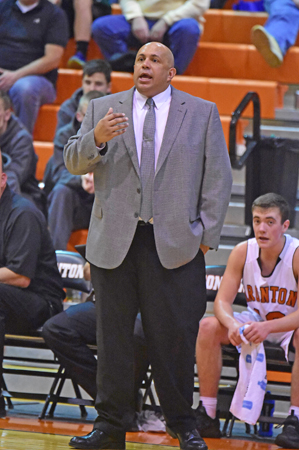 Mark LaFon got a plaque for his 200th win at time when he was actually closer to another milestone.
Although the award was presented prior to last Friday’s game at the Western & Southern Life Insurance Ironton Classic, it was given to the Ironton Fighting Tigers’ head basketball coach long after reaching the lofty plateau.
The Ohio High School Basketball Coaches’ Association presents a plaque to coaches when they achieve wins at 100 increments such 100th, 200th, 300th, etcetera.
LaFon is currently 280-219 for his 23-year career. He is in his 12th season as Ironton’s head coach and has posted a 175-95 record.
His record includes a 52-52 mark in six seasons as the Chesapeake Lady Panthers’ head coach where he guided the team to the program’s only Ohio Valley Conference title.
LaFon came to the game dressed in a suit and tie but not because he was getting the award. In fact, he was not aware that there was going to be a presentation.
“My wife (Angie) got on me and said I needed to look better because I was the head coach,” said LaFon who sheepishly grinned realizing the request had an ulterior motive.
Ironton girls’ head coach Doug Graham — who himself has surpassed 100 career wins — is the Coaches’ District 13 director and in charge of requesting district awards.
Graham and LaFon’s wife and two daughters Samantha and Avery walked out onto the court to make the pre-game presentation.
Also in attendance was former player Trevor White who has been recovering from a severe automobile accident.
“It’s a tough business right now. I was just very emotional and Trevor being here, it was all just too much. I couldn’t speak. I wasn’t even going to attempt to open my mouth because the floodgates were going to open up,” said LaFon.
“(Graham) just wanted to recognize my 200th win because he knew I wasn’t going to turn it in. I told him a long time ago that I’d do it when I retire. Whatever I end up with I’ll get that plaque.
LaFon was never aware of his record until he began coaching at Ironton. His teams have won nine sectional titles and four district championships. The 2012-13 team reached the Division III Final Four.
“I know mine because I got tired of having to keep on asking (for his record). If it wasn’t for having the success like we do here, where you have to put it in the (district) program all the time, that’s when I started knowing.”