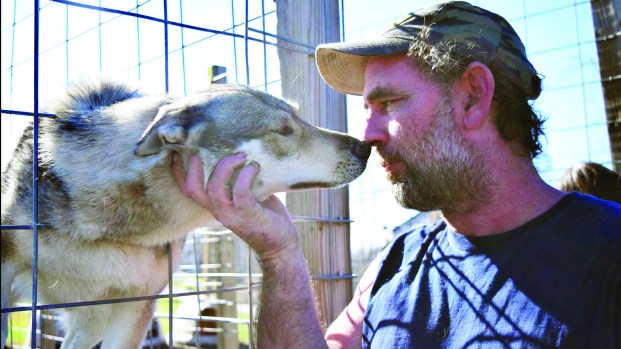 “I bought Cheyenne,” he said of his wolf dog. “I found her on the Internet. That’s how I got into this, through online research.”

Since then, he has acquired 18 wolf dogs, or wolf hybrids and, with his family, runs the Southern Ohio Wolf Sanctuary in Chesapeake.

“When it started, it wasn’t meant to be a sanctuary,” he said. “But then we were asked to take one, then another and it went from there.”

He said the family began doing rescues of wolves that people had purchased, but could no longer take care of.

“Animal control would call us when they got one in,” he said.

Working with his wife, Tina, and children, Courtney and Tyler, they care for the animals until they can be put up for adoption.

He said they have an adoption process for prospective homes.

“We make sure they have the means to take care of them and that it is legal in their area,” he said.

He said the animals are a hybrid of wolves and breeds of dogs, such as huskies, shepherds, Malamutes and Great Pyrenees.

He said some areas require a larger percentage of dog DNA in order for them to be legal.

The category of F1, to which Cheyenne belongs, designates a dog that has a wolf as a parent. F2 is second generation, while F3 are the great-grandchildren of the original wolves.
DeBoard said that some stay with the family, while others are adopted out when they reach 21 months of age.

As to the animals behavior and tameness, he said it depends on how the owner treats them.

Some of his, like Cheyenne, he describes as “big babies,” while others, he said are unruly at first, but can be tamed.

“I always tell them ‘It’s up to you how the dog turns out,’” he said. “Some of them, you have to work to get that trust and bond. It’s all on the person as to the time and effort working.”

He said the key to good interaction with humans is to increase the dogs socialization.

He and his family walk them often, at places such as Ritter Park in Huntington, and take them to events such as Chesapeake’s Octoberfest and Ironton’s Memorial Day parade.

While DeBoard was giving a tour of the grounds, one wolf began to howl. The others quickly joined in, as a chain reaction, calling in unison.

“They do this all the time,” he said.

He said his nearest neighbors, who are at some distance, are understanding and have never complained about the sound.

He said the sanctuary receives many donations from the community.

“We don’t need food,” he said, noting that the animals have a good supply of raw meat, such as deer and pork, as well as grain free dog food. Financial donations to help pay for upkeep of the sanctuary, veterinary care and shelters are preferred.

He said the family has a vet who sees the wolves, but adds that most in the field will treat them.

DeBoard, who used to work at the Big Sandy Superstore Arena said the wolves have had a famous encounter when he took them to Huntington.

“I have a picture of them with Rob Zombie,” he said.

And they were a help to his daughter for a recent school project.

Courtney was asked to acquire unusual items to decorate an unconventional Christmas tree for her art class at Chesapeake High.

Using the hair shed by the animals, she covered an entire tree, which was put on display at the school.

Since the sanctuary has taken off, DeBoard said it has become a full-time job for him.

For more information on the sanctuary, visit their website at www.southern ohiowolfsanctuary.com.

COLUMBUS (AP) — The investigative files of a completed criminal case are a public record under Ohio law and can... read more