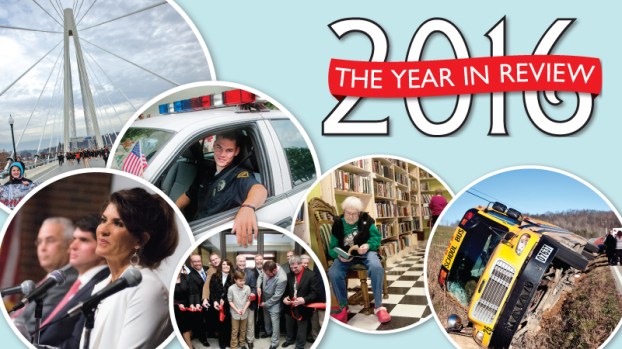 Here is a look at the top stories of 2016, as decided by the staff of The Tribune.

The final phase of construction and opening of a long-awaited new bridge, a contentious election cycle and ups and downs to the economy were among the major stories impacting Lawrence County in its bicentennial year of 2016, while many said good-bye to several notable individuals who had contributed to the region.
Here is a look at the top stories of 2016, as decided by the staff of The Tribune:

New Ironton-Russell Bridge opens
After four years of construction and more than a decade of planning, the new Oakley C. Collins Memorial Bridge, connecting Ironton and Russell, opened to traffic on Nov. 23 with a dedication ceremony. The $81.3 million, 32-foot wide suspension span replaced the 94-year-old bridge, which closed to traffic on the same day. The old bridge is scheduled to be dismantled by early spring. Construction is set for next year on the Kentucky side of the river, to replace the viaduct in Russell that brings traffic to the new bridge.

2016 election
The year saw several highly contested races in the county. Following the death of Common Pleas Judge Scott Bowling in August, a contentious battle took place, with Proctorville’s solicitor Andy Ballard defeating Ironton Municipal Judge O. Clark Collins to fill the seat.
Lawrence Commissioner Les Boggs was defeated in March’s Republican primary by Chris Collins, the assistant director of Lawrence County Jobs and Family Services. However, Collins was defeated in the general election to Democrat DeAnna Holliday. Meanwhile, incumbent Republican Bill Pratt defeated Democratic ex-Commissioner Doug Malone and independent Jon Ater for the second seat on the ballot.
While neither Donald Trump nor Hillary Clinton made stops in Lawrence County during the campaign for Ohio’s electoral votes, two county natives were in the spotlight. Kristen Kavanaugh, a 1998 Ironton High School graduate who now lives in San Diego, was chosen, due to her military background, to address the Democratic National Convention on the same night as President Barack Obama. Following Trump’s victory in November, Ironton native Brigham McCown was named to the transition team for the incoming administration.

Notable deaths
In addition to Bowling, several prominent Lawrence County residents passed away in 2016. Chesapeake officer Aaron Christian died in October from injuries received in a cruiser crash one month earlier.
Law enforcement and first responders also mourned the passing of Windsor Township Fire Chief Don Christian and Carol Kitts, a dispatcher and former sergeant with the Lawrence County Sheriff’s Office.
The county lost three whose contributions to local education were highly regarded — Scott Howard, of the Lawrence County Economic Development Corporation, who was the CEO of the new STEM+M Academy, Don Sands, a former South Point school board member who was a leader in bringing vocational education to the region, and Dr. Clifford Marquardt, who served as an instructor, president and chancellor of Tri-State Bible College.
Two women were remembered for their lifetime of community leadership — Wilma Fox, of Quinn Chapel A.M.E., a longtime social activist whose actions were the catalyst for the desegregation of Ironton’s swimming pool, and Billie Smith, the driving force behind Operation TLC, a group dedicated to the beautification of the county.
Ohio, the nation and the world paid tribute to former U.S. Sen. John Glenn, who passed away on Dec. 8 at the age of 95. The Democratic leader, the last of NASA’s original seven astronauts, was a pioneer in space flight, becoming the first American to orbit the earth in 1962. Three decades later, he would return to orbit on space shuttle Discovery, becoming the oldest-ever astronaut.

Lawrence County Bicentennial
The county celebrated 200 years with a number of activities, including a performance by the Oak Ridge Boys at the county fair in July, a September event at the fairgrounds featuring a visit from the Columbus Zoo and the Newport Aquarium and a final birthday celebration on Dec. 20 at the county courthouse, marking the date of the county’s creation from neighboring Gallia and Scioto counties.

Chesapeake police
In addition to Christian’s death, the village of Chesapeake found its police department in a state of flux throughout the year. Chief Dennis Gibson was removed from his position in a 5-0 council vote in April, after new Mayor Tommy Templeton outlined charges including insubordination and dereliction of duty. His successor in the position, Lenny Abrams, abruptly resigned, along with two officers, in September, citing disagreements with Templeton, mainly over a sober living house in the village operated by Riverside Recovery Services. Randy Lewis, who served for 23 years in the Columbus area law enforcement, was named to the position in the fall.

School bus crash
Ten were sent to the hospital on Jan. 5 following a school bus accident on State Route 243 near Getaway, when the bus went off the side of the road and came to rest in a ditch. Nine students and the driver suffered injuries as a result of the crash. About 30 students were on the bus at the time. The students were all girls, being transported from Collins Career Center to South Point High School. Although no injuries were life-threatening, some were serious and included a broken leg, broken nose and other head injuries.
The crash was caused by Chance A. Blankenship, of Kitts Hill, who was 18 at the time and a student of Collins Career Center. Blankenship was driving a Ford Fusion and passed the bus in a no passing zone, releasing heavy smoke and clouding the driver’s vision. Blankenship confirmed he was driving the car, but said he did not know he caused the crash.
In court, Blankenship originally pleaded not guilty to one fourth-degree count of vehicular assault, and one misdemeanor count of operation in a willful or wanton disregard of the safety of persons or property.
Later, Blankenship pleaded guilty to an amended indictment of one count of misdemeanor assault. The amended indictment was agreed upon by the victims and their families, who Blankenship apologized to. Judge Cooper sentenced him to 45 days in the county jail, two years’ probation, 30 days community service and a two-year driver’s license suspension.

Fatal fire
A late October house fire claimed the lives of three and injured another on Rockwood Avenue in Chesapeake.
The blaze started around 1 a.m. on Oct. 23, and, within two minutes of fire crews arriving, the fire was fully involved, according to Chesapeake Fire Chief Ed Webb.
When crews arrived, the injured victim, Belva Stanley, was already in the front yard with bad burns. Webb said a neighborhood boy, who also had to be treated for burns, helped pull her out of the house.
The three fatalities were Erma Hatten, 81, Tanessa Davis, 27, and Steven Jeffery, 44, who were all residents of the house.

OUS 60th anniversary
Ohio University Southern celebrated 60 years of its Ironton campus with a formal gala event in November, sponsored by the Lawrence County Economic Development Corporation, the Lawrence County Chamber of Commerce and The Ironton Tribune. The school’s former deans were in attendance for the dinner and reception.

Remains found
A grandfather and his son made a grisly discovery on Nov. 18, when they came across a set of skeletal remains while walking near a coal tipple in Ironton. Following an examination of dental records and DNA testing, police were able to identify the remains as belonging to Tamela Simpson, 34, of Gallipolis, who had been missing since March 14. Her death was ruled accidental.
Justin Wilson trial

A South Point man was sentenced to life without parole for the January 2015 murder of Justin Adams, 30, also from South Point, following a four-day long jury trial in March.
Justin Wilson, then 25, was found guilty of aggravated murder and tampering with evidence in the murder of Adams, who was shot in the face at close range as a result of a robbery gone bad at 37 Township Road 616 in South Point.
According to the prosecution, two co-defendants in the case, Derrick Rice and Nicole Eller, conspired to rob Adams of cash and drugs on Jan. 15, 2015, and enlisted the help of Wilson, who brought a 9 mm gun. When Adams wouldn’t give up the money or drugs, Wilson became violent, pistol whipped Adams in the head, threw him on the couch and proceeded to shoot him in the left eye, which killed him.
Rice, who is serving an 11-year prison sentence after pleading guilty to aggravated robbery, and Eller, who is serving a 14-year prison sentence after pleading guilty to aggravated robbery and obstruction of justice, both testified during the trial.
Wilson and his defense attorney argued that there were several holes in the case, and pointed to Rice as the shooter. It was not enough to persuade the jury, as the prosecution argued that there were no other suspects in the case that matched the phone records with testimony given by Rice and Eller within the timeframe of the shooting, pointed out that Wilson had hidden from police for two weeks after the shooting and made note that when police arrested Wilson, he had made an attempt to change his appearance.
In an audio recording played during the trial, Wilson admitted to getting rid of the gun. The gun used and wallet of Adams that was taken were never found, resulting in the tampering with evidence charge.
At his sentencing, Wilson remained adamant that he didn’t kill Adams, as the defense continued to say evidence pointed to Rice as the shooter. Judge Cooper sentenced him to life in prison without parole, which Wilson indicated he wanted to appeal.

Economy
The region experienced highs and lows in its economy in 2016. Just before the year began, Liebert Corporation announced 120 jobs would be added to their Ironton plant over the next two years, while across the river in Russell, 100 workers were told their jobs would be affected as CSX streamlined operations at their facility, reducing work in the mechanical car shop and the yard.
Several new businesses opened throughout the region, such as Boo’s Donuts, Meraki Salon and Consigned Books in Ironton; Downtown Deli in Chesapeake; and Proctorville Hardware and Feed, Auto Zone and Katimali’s Italian restaurant in Proctorville.
Brickhouse Cardio Club completed construction of and relocated to a new facility in Proctorville, while construction of a new Tudor’s Biscuit World in Ironton was nearly complete by the end of December.