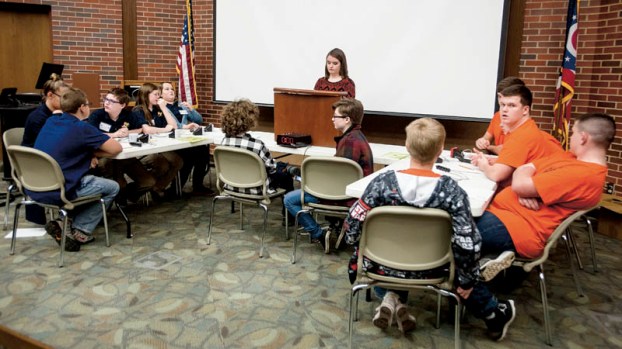 Schools from around the region faced off on Wednesday in the annual Lawrence County Middle School Quiz Bowl Tournament.

The event, which took place at Ohio University Southern in Ironton, was sponsored by the university and the Lawrence County Educational Service Center, and was host to eight teams.

Third place in the event went to Fairland, who lost their initial match, but then made their way through the losers bracket to the final rounds.

They faced off against South Point, and were defeated, 55-51.

“We did much better than last year,” Speed said of the third place showing. In the 2016 event, the school was quickly eliminated from competition, she said.

Fairland was also honored as the regular season champions for the year, for their wins in school-to-school matches.

“We travel every Wednesday for those,” Speed said.

South Point had already suffered one defeat in the double elimination tournament, while Ironton was undefeated.

The match went well for South Point, amassing enough points in the first round of questioning and alphabet round so that it was mathematically impossible for Ironton to make up the difference in the lightning round. Ironton forfeited the lightning round as a result, giving South Point a 42-26 win.

However, as Ironton was undefeated, it required South Point to beat them twice, so they faced off again in a final match, which was moderated by Felicity Jenkins, a 2016 graduate of Symmes Valley High School, whose team won last year’s county high school tournament.

Rick McMaster, the team’s coach, said, like Fairland, it was an improvement on last year’s performance.

“We came in and the kids were confident,” he said. “I told them not to be afraid to answer.”

Floyd, who was coaching South Point’s team for the first time, described the second place win as “awesome.”

“I’ve been teaching for fourteen years and have always wanted to coach Quiz Bowl,” she said.

As her team was facing a tight schedule to catch the bus, she said she was appreciative of Ironton for forfeiting the lightning round, allowing them to get in a final match.

“That was nice of them,” she said.

High school Quiz Bowl teams from across the county are set to face off in the county Ironmaster Tournament, which will take place at OUS in March.

Library programming returns for new year SOUTH POINT — With the holidays out of the way, programming has resumed at... read more