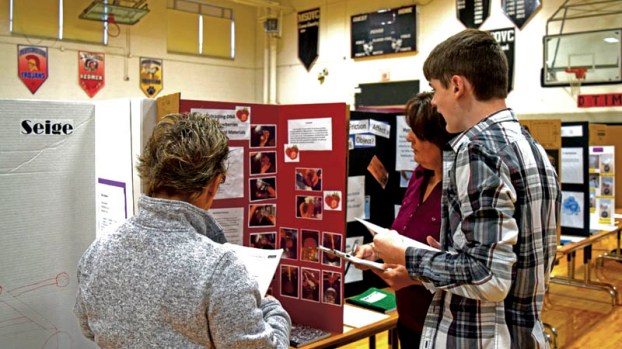 COAL GROVE — Students at Dawson-Bryant Middle School had their science fair on Monday, with each grade judged independently. The science fair offered an opportunity for students to explore the intersection between their interests and their class work while utilizing the scientific process.Eighth grader Natalie Brumett, for example, explained that she chose to explore if adding salt to water helped it boil faster because she has an interest in cooking at home.

Her results showed that adding salt to water does cause it to come to a boil slightly faster. This practical application of science, she noted, was useful because “whenever you want to cook for the whole family, it takes a little while… so I wanted to see if there was a way to speed it up.”

The reason it makes the water boil faster, she said, is “because whenever you put salt in water, it lowers the heat capacity, so then the water heats up quicker.”

“I played the game Jurassic World on my phone,” McKee said. In that game you have to use different DNA strands to create hybrid dinosaurs. This piqued his interest in actual DNA. “I started doing research on DNA extraction,” he continued, “and found out that I can extract plant DNA from fruit.”

He knew he had successfully extracted DNA, he said, when he saw white strands form that he could pull out using a wooden chopstick.

Other projects ran the gamut from chemistry to biology to computer sciences, with each child explaining to the judges what they hoped to achieve with their project and the process they went through to test their hypothesis.

Winners of the event were not available at press time.

SOUTH POINT — A new car customizing business has been open since Dec. 15 in South Point, and its owner... read more