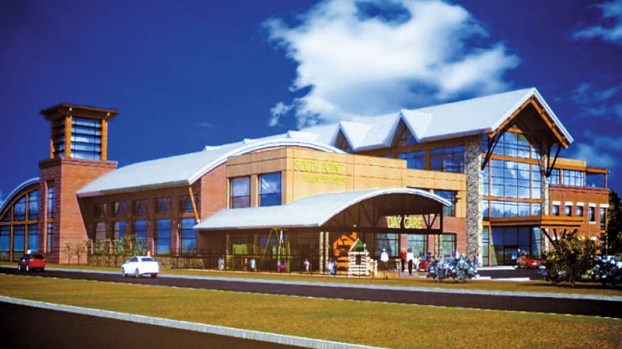 The future Tri-State STEM+M Academy that will be located on the grounds of The Point industrial park in South Point.

SOUTH POINT — Enrollment is open for the new Tri-State STEM+M Academy and faculty say the numbers are meeting expectations.
“We have several sign ups with each informational meeting,” Alicia Spears, who will serve as an instructor at the school and has been planning its curriculum, said.
The school, focusing on science, technology, engineering, math and the medical fields will be open to students from Ohio, West Virginia and Kentucky, starting in the ninth grade.
Organizers have been hosting monthly meetings to educate parents and prospective students on how it will operate when it opens its doors for its first classes in August.
This year’s first meeting took place on Thursday, and was the first in which director Jayshree Shah and other speakers went live on the academy’s Facebook page to stream the event.
As a public school, tuition will be free for Ohio students, while West Virginia and Kentucky students will have to pay a fee to attend.
Shah told the group, assembled at the Lawrence County Chamber of Commerce headquarters, that the school would be ideal for students who did not feel challenged in their high school studies or sought ways to apply what they have learned to their chosen career fields.
She said that many students have struggled in college, despite being “A” students in high school, and that the academy would help to better prepare them for the college experience, by allowing them to take courses for dual high school and college credit.
These would start with a visiting professor to the campus and would eventually lead to the students attending a university themselves.
Another way the academy plans to prepare students is to get them out into the community through internships and job shadowing in their career fields, Spears said.
A major focus of the academy is to allow students to be self-directed learners, Shah said.
“Our goal is to prepare students to be successful in STEM,” she said. “We want students to come back to or stay here. That will help Lawrence County to grow.”
Spears said she has always been a champion of hands-on learning.
“That’s going to be the hallmark of this school,” she said. “We are not going to be focusing on just content knowledge.”
To illustrate the type of projects they might expect, Spears took the students present and presented them with a design challenge.
The goal of the “Micaroli” project was to build a small car within 20 minutes, using hot glue guns and assorted pasta that Spears provided, and see whose could roll the furthest on a ramp.
“Imagine that you’re a tiny mouse and you’re on an Italian island and you have to escape a volcano,” Spears said. “I made all of that up just now.”
Following the completion, the students were awarded Smarties candy for the best looking car and for the most distance covered.
Spears said that one misconception of the new school, which will be located at The Point industrial park, is that it will focus solely on science and not feature fine arts, literature or humanities.
“That’s not the case,” she said. “We’ll focus on science, but we’ll teach things like social studies within the context of science. For instance, we’ll look at how science influences government.”
For the fine arts, she said the school is planning a partnership with the Huntington Museum of Art, where students will learn how heat energy is used to make pottery.
“They’ll make pottery and fire it at the museum,” she said. “We’ll also take them to a glass factory, so they can see how all that ties together.”
Like most public schools, the school will also teach foreign languages, but Spears explained how they plan to approach the subject.
“We’ll go to a foreign country and they’ll get to be immersed in the language, food and culture,” she said.
More informational meetings for the school are scheduled for Feb. 7, March 7 and March 28 at 7 p.m. The deadline to apply to school for Lawrence County will be the end of March, while those from West Virginia and Kentucky will have through the summer.
Enrollment can be done through the school’s website at www.tristatestem.com or by contacting the school for an application.

WASHINGTON (AP) — If you haven’t signed up for health insurance, you may soon be getting a not-too-subtle nudge from... read more