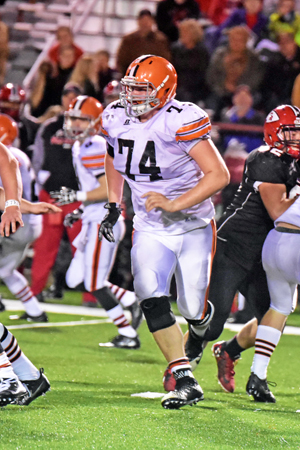 Tyler Webb has one more high school game to play.
The Ironton Fighting Tigers’ senior lineman will get to play his final high school football game on Saturday, April 29, at Paul Brown Tiger Stadium in Massillon in the 72nd annual Ohio High School Football Coaches’ Association North/South All-Star Game.
The 6-foot-6, 300-pound Webb is a four-year starter and was first team All-Ohio in Division V. He was special mention All-Ohio as a junior.
There will be two all-star games with the Divisions 4-7 from the South playing the North and the Divisions 1-3 matching up.
The Div. 4-7 game will be held at noon followed by the Div. 1-3 game at 4 p.m.
The Ohio All-Star Game is the longest running  prep all-star game in the nation dating back to 1946.
Tickets are $10 and cover both games. Tickets will be available at the gate one hour prior to kickoff on game day.
Some of the previous stars to play in the game are current NFL Hall of Famers Len Dawson, Roger Staubach, Jack Lambert, Alan Page, Larry Csonka and Paul Warfield.