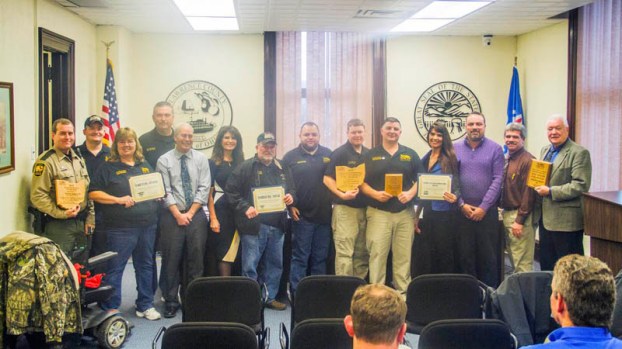 Several members of the South Hills Longbeards chapter of the National Wild Turkey Federation were on hand at the Lawrence County commission meeting Tuesday after the chapter received numerous awards for 2016 achievements at a recent awards ceremony in Marion.

As a chapter, South Hills received second place in the Southern Region of Ohio for its 2016 fundraising banquet in net dollars raised as well as being recognized as a Golden Gobbler chapter, meaning that the fundraising banquet netted at least 50 percent of the gross amount received during the event.

In addition, the chapter was recognized for recruiting the third highest number of Women in the Outdoors members in the state with 63, and second highest of the 77 Ohio chapters in the statewide recruitment of annual members with 150.

The chapter’s Women in the Outdoors event from September of 2015 is set to be honored as the Best New Women in the Outdoors event in the country at the National Wild Turkey Federation’s national convention in Nashville, Tennessee next month. Also at the national convention, the chapter was notified that it would be honored for reaching the Half Million Dollar Club after its 2016 banquet. The status represents the total net dollars the chapter has raised since it was founded in 1995.

Chapter president Larry Pernestti spoke on behalf of the chapter.

Also at commission, Dave Lucas, founder of Dave Lucas Communications, expressed his desire to see more county unity and transparency by creating a public communications office through the commissioners and more effectively using social media. He explained the need for such action by saying that there needs to be one voice to hear what’s going on in the county to minimize confusion and untrue rumors.

“86 percent of all Lawrence County residents are on Facebook,” Lucas said. “Social media is where most people get their news now days, and it’s a resource that needs to be more utilized.”

Lucas added that the need for a public communications office through the county commissioners includes getting important messages out to the public through posts and live video. One of the main messages Lucas stressed getting out to the public was the importance of spending money in Lawrence County, as sales tax makes up a majority of the county budget.

“Not only will it help the county’s finances,” Lucas said. “But it also helps all the businesses.”

Dave Lucas Communications already has a studio ready to use if the commissioners decide to follow up on such action.

“In the long run, you don’t lose money, you gain money,” Lucas sad.

Chris Chiles, executive director of KYOVA Interstate Planning Commission, also spoke to the commissioners about projects the organization is working on throughout Lawrence County. KYOVA is a metropolitan planning organization that deals with funding transportation projects in the Tri-State.

• Approved and signed the weekly invoices and certificates as presented by the Auditor’s office.

• Approved a request for a Speed Zone Revision for County Road 53, as requested by Patrick Leighty, County Engineer.

• Approved and signed the Preventative Maintenance Agreement Primary Extension in the amount of $16,140 for the HVAC Services to be provided to the Lawrence County Department of Job and Family Services by Perfection Group, contract term Feb. 1, 2017-Jan. 31, 2018.

• Received and filed the 2016 Court Statistical Reports that are prepared monthly and sent to the Supreme Court of Ohio as requested by Betsy Clark, Chief Deputy Clerk, Probate Juvenile Division.

• Approved the out of county travel for Jarred Leffingwell and Aaron Jackson, URS, to Piketon for their CDL test.

• Received and filed the correspondence regarding Armstrong Cable.