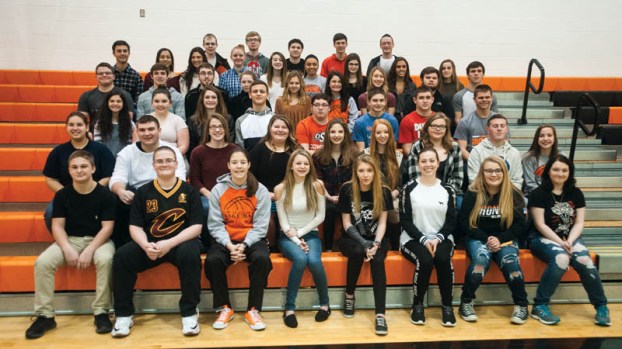 Students from Ironton High School pose for a group shot after being recognized during an awards assembly.

There are various ways to motivate people, but Ironton High School principal Joe Rowe feels like he has hit on two that work well with his students; money and time.

The school’s Tiger Incentive Program awards students for their grades, attendance, and avoiding disciplinary action. Students who achieve the highest level of recognition, the Golden Tiger Award, are allowed to leave for lunch two minutes early every day of the quarter.

“That’s a great motivator,” Rowe said. “They get to get in the front of the (lunch) line.”

The other motivator is money. Kids who are awarded Golden Tiger status are granted five entries in a cash drawing at the end of the school year. Silver Tigers get three entries in the drawing, while Bronze Tigers get two, and Copper Tigers one entry.

To be considered for a Golden Tiger Award students must not only maintain a 3.5 or higher GPA for the nine weeks period, they must avoid any disciplinary referrals and have no more than one absence or tardy. Silver Tigers must also avoid absences and disciplinary referrals, and have a GPA between 3.0 and 3.49. Bronze Tigers must meet these criteria, and maintain a GPA between 2.75 and 2.99. Copper Tigers may or may not have a GPA higher than 2.75, but must have shown “great improvements” as well as “outstanding” attendance, behavior, and participation. All students nominated for Student of the Month by their teachers are honored as Copper Tigers.

All award winners receive a coupon good for food from a local restaurant. In addition all Bronze Tigers and above receive free admittance to a home ball game of their choice. All Silver and Gold Tigers also receive an additional restaurant coupon, and the Gold Tigers, as noted, are excused for lunch two minutes before their classmates.

Students of the Quarter are nominated by their teachers, and then voted on by the full staff. During the presentation honoring these students for their academic success, Rowe also notes the differences, and improvements, within and between classes, as well as between students involved in extracurricular activities such as band, sports, and cheerleading.

This level of friendly competition, between students as well as between classes and groups, has lead to increased academic success, Rowe said, with the school achieving an overall average GPA of 3.06.

“I have to be honest with you, it really means something to them,” Rowe said. “There is something about Ironton, kids want to compete. They want to outdo one another. That has had an effect (on grades, discipline, and absentee rates).”