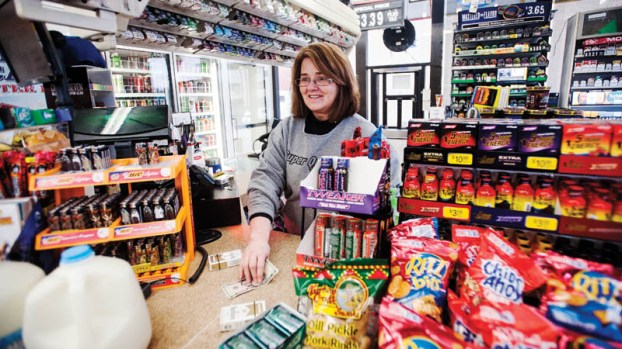 Sherlyn Tussey works the register during a shift at Super Quik in Russell.

RUSSELL — With the closing of the old bridge from Ironton into the city of Russell, and the opening of the new, changes are happening on the Kentucky side of the river.
The old bridge, which carried traffic from Ironton into downtown Russell closed on Nov. 23, replaced with the Oakley C. Collins Memorial Bridge upriver, which connects directly to U.S. Route 23.

The change has meant that downtown Russell has seen less vehicular traffic in the last two months.

“It’s definitely slowed down,” John Grey, the manager of the Super Quik convenience store said of the traffic change. “But our business is doing fine.”

Bill Hopkins, who has served as Russell’s mayor for the past 10 years, said the lighter traffic downtown was expected with the change in the bridge site, which was chosen, in part, by Russell officials 12 years ago.

“We have fewer vehicles coming through, but we’re doing OK,” he said. “Everyone knows we’ve lost some commercial business downtown over the years, but we still have 15-17 storefronts open for business.”

Hopkins pointed out that the city is growing overall, but, as times have changed, commercial development tends to occur on the outer parts of the city, away from the river, in areas such as the shopping plaza on Diederich Boulevard, which is home to Kroger, Hobby Lobby, Lowe’s and other major retailers.

He said businesses downtown, such as the convenience stores, will still see a good deal of traffic.

“People come from Ohio to get cigarettes,” he said, noting the lower price in Kentucky. “And now they can get alcohol here as well.”

As for downtown, he said there is still room for development.

“People may come downtown for different reasons,” he said.

He said plans are for the site of the old bridge and its approach to be taken over by the city and used to expand the park, where he would like to see things such as a splash park, which exists in Ironton.

As the city of Ironton has done, Hopkins said Russell is putting in a request to get a piece of the old bridge.

He said they are hoping to acquire a crossbeam mounted on a pier, which they would ask crews to leave in place.

The city would then repaint it. In addition to serving as a memorial to the old bridge, the segment, he said, would also serve as a barrier to prevent cars from going into the river.

He also said the city wants to look into bike trails, which he said are growing in popularity nationwide.

“We’re working on that, to get a trail through downtown Russell,” he said.

Overall, he said he sees downtown Russell becoming more residential in coming years, and said the city is working to rezone so some stores can be converted into housing.

Now that the new bridge has opened, major construction projects will be taking place on the Kentucky side of the river.

Starting next year, water and sewer line, located under U.S. 23 will be replaced and moved to the side of the road.

“That way, if we have a major break, it won’t happen in the main line of transportation,” Hopkins said. “The rights of ways have already been purchased.”

The major project, though, will be the replacement of the viaduct, leading from U.S. 23 into downtown Russell, which Hopkins estimates to be about 50 years old, with completion expected in about four years.

A key difference from the existing road will be that vehicles traveling from U.S. 23 into Russell will go up a ramp on the hill side, cross an overpass and then go onto the new viaduct into downtown.

“It will keep us on our toes for the next four years,” Hopkins said.

Overall, he said he is optimistic in the future of Russell.

“Our city is growing, more on the outskirts, and we’re not going to lose downtown,” he said.

After eight decades, memories remain It was eight decades ago when the mighty Ohio River swept over its banks and... read more